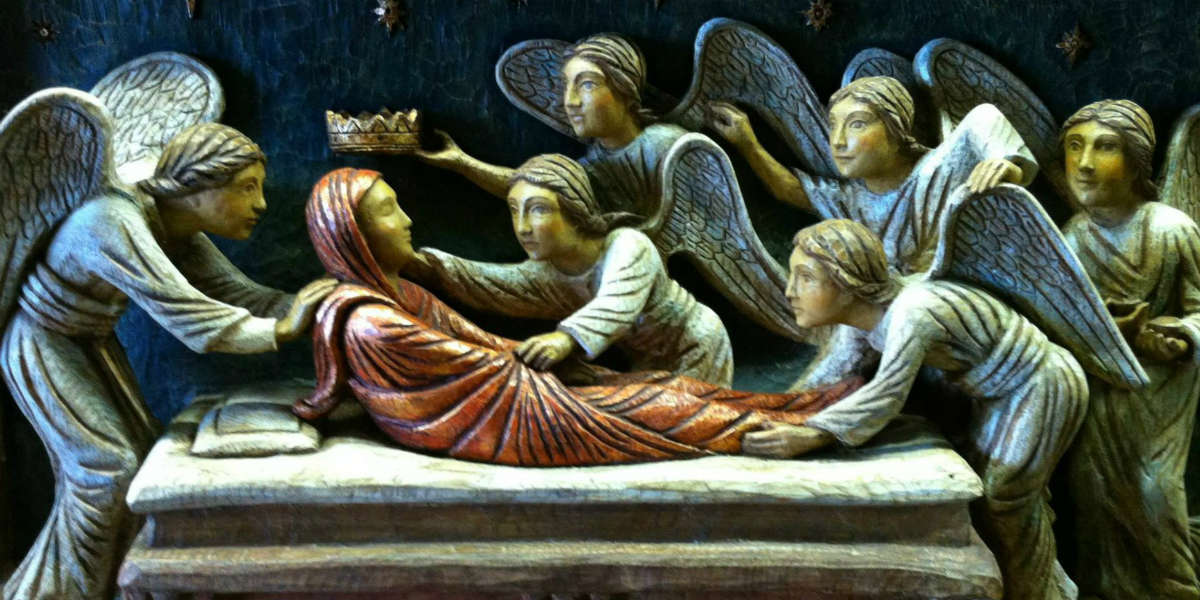 Mary is the new ark of the covenant. In the Old Testament, the ark of the covenant, containing the tablets of the ten commandments and a bowl of manna from the desert experience of the People of God, represented God’s presence among his people. The cover of the ark was the ‘mercy seat’ where God sat.

In the gospel according to Luke, Mary is the new ark of the covenant who travels to visit Elizabeth. Mary is not carrying symbols of God’s presence but Jesus, the word of God made flesh. This divine presence is recognised by the infant John who jumps in his mother’s womb as he is filled with the Spirit in Jesus’ presence.

The reading from the book of the Apocalypse speaks of the triumph of the woman, the new People of God, over evil. This woman of the Apocalypse also represents Mary, the mother of the Church. Today’s solemnity of the Assumption celebrates Mary’s victory over death, and, in Mary, humanity reaches its fulfilment. In Jesus, God become human and humanity is joined to divinity, in his Ascension, Jesus glorifies our humanity by taking it with him to the right hand of the Father. In the Assumption of Mary humanity is once again glorified as it is again taken to heaven, the first fruits of those who have died and are risen against in Christ.

For the members of the Paulist family, the feast of the Assumption of Mary into Heaven is an important celebration as Mary, in her triumphant Assumption, has been chosen by the Servant of God Joseph De Piro as one of the principal patron saints of our family.

Already in 1909, when Joseph De Piro was preparing for the foundation of his Society, he wrote a draft of the formula to be read by the members during their religious profession. Here he referred to Our Lady Assumed into Heaven.

On 12 June 1910 Archbishop Peter Pace opened and blessed the first house of the Society, in Mdina. In his speech the Founder again mentioned ‘Mary, our mother Assumed into Heaven.’

In the Society’s Council meeting of 17 April 1928, the Founder invited his assistants, Fr Spiteri and Fr Callus, to discuss the opening of a novitiate for Brother Catechists at St Joseph’s Orphanage, Santa Venera. On 4 August it was agreed to open this novitiate on the 15 August, Feast of the Assumption of Our Lady into Heaven. The novitiate was dedicated to the same ‘Blessed Virgin Assumed into Heaven.’

When he was writing the Acts of this session, Callus, the Secretary of the Council, noted that Mary Assumed into Heaven was the ‘Principal Patron Saint of our Society.’ As is customary, De Piro accepted these minutes by signing them.

In the following Council session on 11 August, the Founder again asked his assistants to discuss the opening of an ‘educandato’ to house young men aspiring to join the Society. This aspirandate was to be housed at the Birkirkara Oratory. The name of this residence was not determined at that session. The discussion continued on 15 February 1929 where the aspirandate is referred to as ‘Educandato Santa Maria.’ In Malta the title Santa Maria refers to the Assumption of Mary into Heaven.

In the ‘Saint Paul: Almanac of the Institute of the Missions,’ De Piro often made reference to the fact that the devotion to Our Lady Assumed into Heaven continued within the young Society. Here, under the 15 August, he noted: ‘in the chapel we celebrate her feast under the title of the Assumption, a title which has brought new graces on the Institute.’ Later the Founder wrote:

“In our Missionary Institute we too tried to offer a bouquet of flowers to Our Lady with a literary academy among the students housed at the Oratory, Birkirkara. We concluded the academy with a resolution to request the Bishop to place another pearl in the crown of Mary, Our Most Holy Mother, through the dogmatic definition of the glorious Assumption of Mary.”

A year later he added: “Therefore we too chose her as our most cherished patroness, we who, since the beginning of the Institute experienced Mary’s help. Since the Institute had its beginning in the island of Saint Paul, we felt that we could not do better than to venerate her under a very ancient custom in Malta where her assumption into heaven is celebrated on both islands under the title of ‘Santa Marija.’ … When, in the course of development of the Institute, we opened a residence for young aspirants at the Oratory, Birkirkara, we could not find a better name than that of Santa Marija. Since it was the centenary of the Council of Ephesus we dedicated the first academy held at this aspirandate in honour of the Blessed Virgin. Before we concluded that dear meeting, though still small, we adopted a resolution to ask the Bishop, to request the Pope to advance the dogmatic definition of the Assumption of the Blessed Virgin, how and when he sees fit.”

In this last writing, the Servant of God expresses why he chose the Assumption of Mary into Heaven as a patron saint for the members of his Society. The Congregation was founded in Malta and the Maltese have a special veneration to the Assumption of Our Lady. Yet, in Malta there is also a strong devotion towards Our Lady of Mount Carmel. For an image to be canonically crowned, it is necessary that the image itself have a long history of devotion towards it, and graces have been granted through its intercession. On 15 July 1881, Archbishop Carmelo Scicluna crowned the image of Our Lady, under the title of Mount Carmel, in Valletta. This was the first image ever to be crowned in the Maltese islands. Many Maltese Christians observe Wednesdays and Saturdays as days of prayer and mortification in honour of Our Lady of Mount Carmel. Ursola, the mother of the Servant of God, was a member of the Carmelite Third Order.

The feast of the Nativity of Our Lady, known on the Maltese islands at Our Lady of Victories, has been considered by the Maltese as the one who saved our islands from their enemies, especially during the two great sieges: one under the Turks in 1565, and the other by the Germans in the Second World War. As far back as 1585 a church was dedicated to the Nativity of Mary, referred to as ‘de la Vittoria’ (of the victory). Along the years many devotions were practiced to thank Our Lady for her intercession in favour of the Maltese. In Malta alone there are 47 churches and chapels dedicated to Our Lady of Victories.

In 1570 a detailed inventory was carried out in the parish of Zabbar, Malta. Here reference is made to the high esteem which Our Lady, under the title of Graces, enjoyed. Until recently it was not uncommon to find an image of Our Lady of Graces in many Maltese houses.

Our Lady of Mellieha is another very popular Marian image among the Maltese. De Piro led at least two pilgrimages to the sanctuary at Mellieha. On these occasions he preached about Our Lady. In ‘Saint Paul: Almanac of the Institute of the Missions’ the Servant of God wrote an article about Our Lady of Mellieha. Here he wrote about “… the many people who have been and are still visiting her sanctuary ….” De Piro encouraged the readers of his almanac to go visit this image of Our Lady.

Despite the fact that all these Marian titles were popular among the Maltese, and even with De Piro himself, he chose none of them for the members of his Society. He preferred the mystery of the Assumption of Our Lady. Pope Pius XII declared the dogma of the Assumption of Mary into Heaven in 1950. ‘The ever Immaculate Virgin Mary, after her life here on earth, was assumed to the glory of heaven, body and soul.’ The belief that Our Lady was Assumed into Heaven had a very long history within the Catholic Church. We would suggest that the Servant of God chose Our Lady in her Assumption as one of the principal patrons of the Society because it embodied his belief in the glorification of the whole human being.