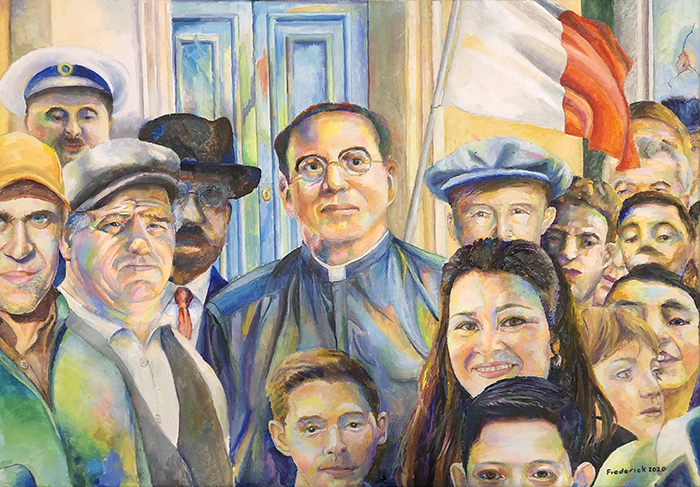 Joseph De Piro, a humble and holy priest, lived in Malta at the turn of the 20th century. Though he was of noble descent, he lived with the poor and for the poor. He deeply cared for people who had little support and no one to turn to. His generosity was the product of a deeply religious upbringing, that went beyond the devotional, and was firmly rooted in a sincere effort to put into practice the Lord’s commandment to love God and neighbour. It was also a personal virtue that he nourished and shared with others.

Joseph De Piro excelled in the ability to notice other people’s needs, even before any of his contemporaries did. His practical mind was constantly looking for new ways how to assist those in need. He did not do this only to remedy immediate needs, or in a temporary fashion, but strove to build structures to help the many disadvantaged people he ministered, to get on their feet. The list of his projects abounds. He helped poor families and widows, assisted migrants who wanted to leave the island for a better future, helped workers fight for their dignity as citizens, taught catechism to children and worked to bring the Word of God to peoples in distant lands. One characteristic that was always present throughout his life was his attention to orphans and children who would have otherwise not made it through life. Gradually, the major orphanages in Malta were entrusted to his care, and one of them even became his home. The night before his sudden death, at the age of 55, was spent at St. Joseph Home, in Santa Venera.

Joseph De Piro brought with him a comforting presence in every place he went. He was a man of God, and his word carried a certain weight that not only sought solutions but also brought healing at all levels. His personal intimacy with Christ helped others grow in their faith; his contemporaries speak of him as a person who touched their lives in a deeply personal way.

In 1988, the Missionary Society of Saint Paul (MSSP), the Religious Congregation founded by Joseph De Piro, initiated the official Process of his Beatification with the desire to bring to light the virtuous life that this man of God lived. From the very start, anyone who knew this priest felt that his intercessory nature had not diminished with his death. Joseph De Piro was a man of silent action, and in this silence, helped many humble people who turned to him in their time of need.

Many people have reported having received graces from God after praying through the intercession of Joseph De Piro. Parents prayed for their children to return to the faith, broken marriages were healed, people were spared from some horrible ordeal or cured of some ailment, and others were able to overcome certain trials.

Recently, our postulation, the office that deals with the Cause of the Canonization of Joseph De Piro, has started to study the details of the medically unexplainable healing of two newborn children. These healings, set apart in time by 15 years, happened in different continents after the intercession of Joseph De Piro was sought. One cannot help but feel that Joseph De Piro’s special attention to the young, among whom he spent so much time and energy in his life, is being reconfirmed after his death. Maybe, just as in his lifetime, this is his specialty after his death.

Dear brothers and sisters, Joseph De Piro is still very much with us. He is a part of the Church he loved, and from heaven, he intercedes for us in our various needs. I encourage you to pray with his intercession, he who never turned his glance away from anyone who was in need. Tell others about Joseph De Piro and invite anyone who is experiencing hardship, to pray to God through his intercession. You can rest assured that you will be accompanied by this great man.

You can contact Fr. Mario Zammit MSSP, our Vice-Postulator, for more information, or to share with us any grace you received through the intercession of Joseph De Piro’s. Fr Mario can be reached at [email protected]. No grace is insignificant if received with faith. Please share with us your stories and you can also inform us of your prayers so we can join you as we pray to God through the intercession of Joseph De Piro.

Let us make our own this beautiful prayer, composed from his various writings.

Lord Jesus, let my heart be similar to yours,

inflamed with your love,

so that I may be your disciple and follow you wherever you go.

Help me to spread in the world the fragrance of your love.

Give me the gift of your Holy Spirit

as my companion and guide.

Through the intercession of your

grant me the grace I am asking …

and continue to inspire and guide me

so that I too may be generous

and a missionary according to your heart.