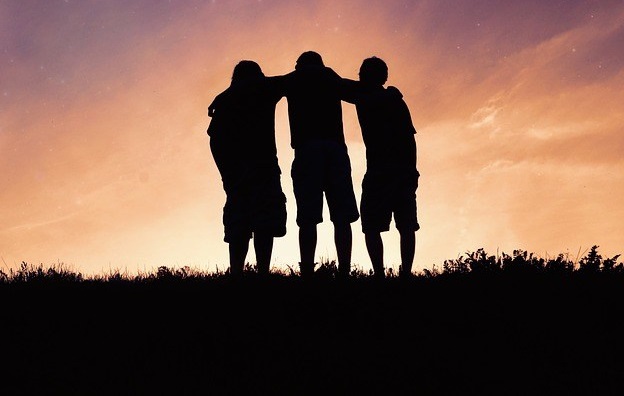 Through its liturgy, the Church is both a teacher and a mother. In the first two Sundays after Easter, the teaching Church reminded of the need to die to ourselves in order to rise again with him. In the fourth and fifth Sundays the mother Church spoke to us about Jesus the good shepherd and about fraternal love and charity.

In the year 1929-30, the Founder used to do a number of conferences with the lay-brother novices. Jerome Gatt, one of these novices, took notes of all these conference. (these notes were translated into English by F. Ferriggi.) Among other topics, the Servant of God Joseph De Piro spoke about charity.

31 October 1930
Charity is very necessary in the community; without charity the community cannot function. When the Church decides to approve a new congregation, she looks for two aspects: administration and charity. The Church checks that the new congregation is being governed well and whether there is understanding and charity among the members. When the Church finds that these two points are being practiced, she approves and allows the congregation to develop.

6 November 1930
Charity is the necessary means by which the religious are united. In the book Practice of Perfection and Christian Virtues by Alonso Rodriguez sj, we read that community life is like the wooden planks in a ship’s hull. The planks are pulled together with tar and ropes is placed between them, to stop the water from coming in. Similarly, the religious in community should keep charity between them to stop any differences from creeping in and drowning them, like a ship that sinks. If the planks of the ship move away from each other, water will seep in and sink the ship.

This can also happen in religious life. The religious start with not bearing each other’s defects patiently and thus they sink. It is like the religious in the community that had to be disbanded by Superior General; the only way forward he could find was to assign the members to other communities. It is very wrong when religious speak publicly about the defects of their brothers.

Religious often work with many other people, both adults and children. We need to be careful that children do not hear about the differences that may exist between us; we should not involve them in our internal matters. We need to leave children out of this. In the orphanage the children have their dormitories, and we need to send them there.

When a religious is sent out on a mission on his own, he cannot achieve anything. When he is accompanied by a community, much more can be achieved. When Fr George Bugeja and Fr Emanuel Vassallo, two passionate priests, were working together at St Joseph’s Orphanage, one gentleman, whose intention was certainly for the good of this orphanage, approached me and, among other things, told me that things were not being done well at the orphanage, because there was no religious community.

This indicates what lay people think about religious communities. Although our society is only twenty years old, we are grateful to God that we have already gained a reputation that there is unity amongst us. This does us credit.

One day another man waved the Freemasons’ salutation at us; Freemasons salute each other by showing the middle three fingers of their right hand. This is a sign that symbolises the perfect unity which Freemasons have among themselves: external events are reported within the group, but internal affairs are not shared outside. Again, this is to our credit.

Pope Pius IX had said that if we all knew the terrible and evil rules of the Freemasons, then everyone would condemn them, and yet, nothing is leaked out, because woe betide him who dares. Therefore, let us also try to be united among ourselves to be able to work for the glory of God, for our own benefit and for the salvation of our neighbour.

7 November 1930
We have spoken about the need for charity within a religious community. Today we will address how to maintain charity. St Paul said that it is necessary to carry the defects of our companions to persevere in this virtue. A community is made up of members coming from different backgrounds with have different opinions and feelings, which can be either right or wrong. Therefore, how are they going to live in the same house? Charity does the miracle, by being patient with one another. For example, one member is very annoying and I cannot even stand his voice. The moment I see him I speak to him harshly, I am always criticizing his actions with my friends and I report him to the superior even for the smallest mistake. This type of behaviour can only lead to quarrels and division. Instead, I need to take St Paul’s words and bear his defects patiently.

The same thing needs to happen when someone offends me. I should not seek vengeance. Maybe the other person has already sought to remedy his action, and I am still pondering how best to get even with him. We need remember that there is always something good in every member. We should do our utmost to cultivate the good in others so that we can use it to cover up the evil.

On one occasion our bishop (Archbishop Mauro Caruana osb) was present at the solemn profession of a group of religious sisters. As the presiding bishop, it was his duty to give a reflection. He decided to speak about St Paul’s saying that we must be patient with one another.

8 November 1930
In matters of charity, we should not seek what is expedient for us, but rather what is good for our neighbour. We should never use our office imprudently. Because he has things in his responsibility, the imprudent religious takes whatever he wants, whenever he wants. This attitude would cause us to miscalculate and to hit a reef.

We have two lighthouses to guide us. One helps us to avoid the reef and the second one leads us to harbour. The first lighthouse represents the need for us not seek our own interests, the second one represents the need to seek what is best for our neighbour. Divine Providence has placed us in charge of these children, the prefect of a dormitory. I have to try to discover why I have been placed in this role. The aim is the spiritual and temporal welfare of these children. I should not abandon these children to seek my own needs. Providence may at times bring it about that what is good for the children is also pleasing for me, we should accept this when it happens, but not make this our principal aim. It is wrong if the one in charge uses his role as an excuse to do whatever he likes.