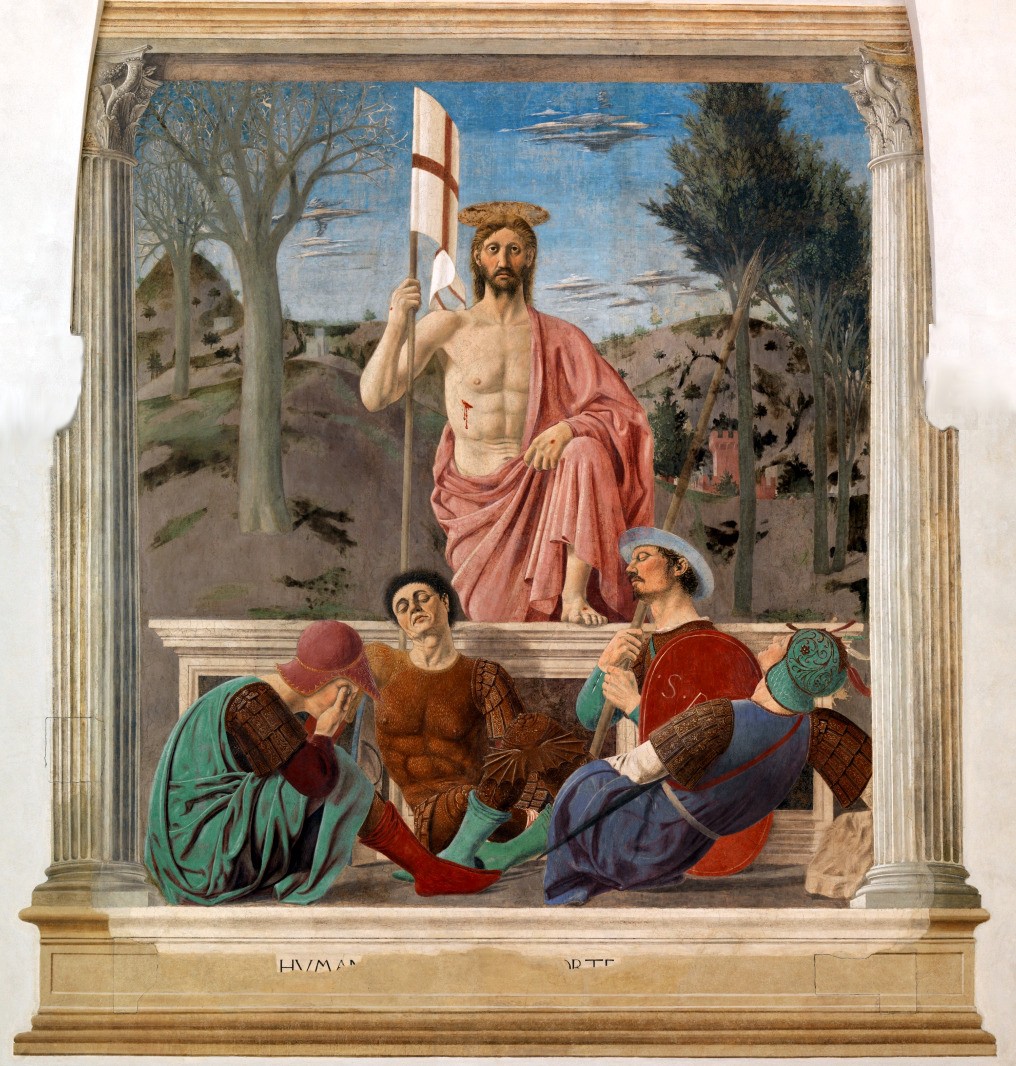 Now when Jesus came, he found that Lazarus had already been in the tomb four days. Bethany was near Jerusalem, about two miles off, and many of the Jews had come to Martha and Mary to console them concerning their brother. When Martha heard that Jesus was coming, she went and met him, while Mary sat in the house. Martha said to Jesus, “Lord, if you had been here, my brother would not have died. And even now I know that whatever you ask from God, God will give you.” Jesus said to her, “Your brother will rise again.” Martha said to him, “I know that he will rise again in the resurrection at the last day.” Jesus said to her, “I am the resurrection and the life; he who believes in me, though he die, yet shall he live, and whoever lives and believes in me shall never die. Do you believe this?” She said to him, “Yes, Lord; I believe that you are the Christ, the Son of God, he who is coming into the world.”

REFLECTION: The image we have in front of us considered as one of the most central icons in the history of art, especially that of the Renaissance period, might be helpful in adequately understanding the last word on the identity of Jesus. This fresco that is being painted directly on the wall helps us understand the centrality of Jesus being risen from the dead. His look meets yours; the majestic way in which He presents the resurrection, with His foot placed on the tombstone – Christ embodies the power of the event of His resurrection. Explicitly, even while holding the flag of victory, He’s broadcasting that death isn’t the last word. Underneath Him, half asleep and even somewhat humorously, the artist places four figures, four soldiers whose work was to guard death, so it remained death. Still caught up in their tiredness and in the alienation of the world, they fail to realize that death is changing into life.

Interestingly, in the Gospel of St John, Jesus says, ‘He is the life and the resurrection,’ not in the context of His own resurrection, but as we read in the Gospel, He makes this statement in relation to the resurrection of Lazarus. Lazarus, forming part of the family from Bethany, the friends of Jesus, goes through the tragedy of death. Jesus arrives late when the news of healing and possibly saving becomes more remote, and Jesus makes this profound statement in front of his friends Martha and Mary, whose faith in this tragic moment was seriously tested. However, through the power of Jesus, the master over death, Lazarus no longer remains wrapped in bandages and closed in the darkness of the grave but is given a second breath of life. What was seen in front of everyone was that Lazarus’ chapter of life crumbled, but Jesus breathed His spirit that gave him the possibility of a new life.

What’s more suggestive in this image of Piero della Francesca is a detail from the story of its existence. Unfortunately, we were very close to losing this image for good. During the Second World War, when the Allies were moving up to reclaim Europe from the Nazi power, orders were given to bombard the village where this image was found in order to eliminate any risks that the Germans might re-occupy it. However, Tony Clarke, an English soldier, recalled reading in a book that mentioned that there was this significant art piece in the village of Sansepolcro. For this reason, while he ensured that the enemy retreated completely, he also sought that this image would be preserved for future audiences. By God’s grace, and thanks to the decisive action of a single man who disobeyed orders, this image was saved.

One cannot help but see similarities between this historic fact in relation to this image and Christ’s resurrection. Poignantly, the identity of Jesus gives light on this fact in the story of this painting. The Lord risen from the dead, is this experience of God that echoes in our life, that death and destruction aren’t the last words. The irony of the image, between Jesus standing tall and victorious over death while the world remains asleep and lives the death of the lack of beauty in life, is not simply an image but a truth we live every day.

Today even we – you – who with us walked through this journey from Lent to the death of Jesus, have a choice. The Lord is giving you His word that death isn’t the last word, so even what right now in your own life is dragging you down in the sludge of evil, sickness and problems… they aren’t the last word. You may either sleep before this reality or otherwise, with your eyes on His gaze, you may realize that with Him, you have hope to wake up to a  new life. Today, you also have another choice to make, more related to this icon. You can, too, be another Tony Clarke, who looks after and protects all that is beautiful, good and true so that by the grace of God, all that appears to be ugly, wrong and false around you is given a prospect of new life.