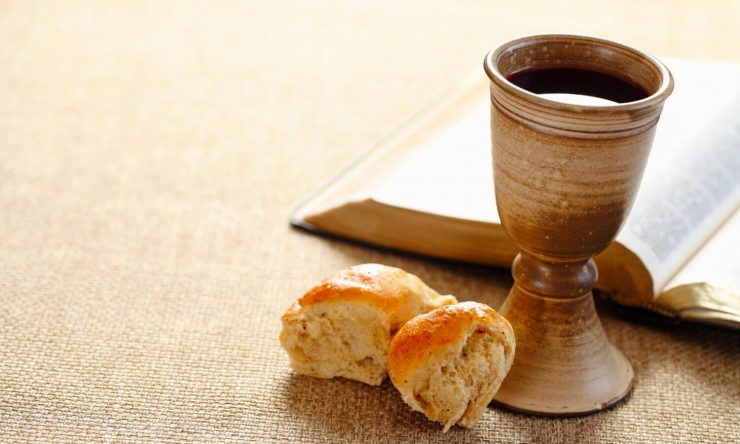 In order to help us celebrate and understand the mystery of the Eucharist, the Body and Blood of Christ, the Church today gives us three readings that reflect on the use of sacrifice as a sign of our union with God.

When the People of God offered the temple sacrifice, they shared a meal with God. An animal was sacrificed and while the fattiest parts of the animal were offered to God, those offering the sacrifice partook of the rest of the animal. The blood, representing the life of the animal, belonged to God, because all life is God’s. The blood therefore could not be consumed, instead half the blood was poured out on the altar and the other half sprinkled over the people, signifying that the people shared in the life of God.

This understanding of the temple sacrifice is carried by the Church into the celebration of the Eucharist. Each time we celebrate Eucharist we share in the sacrifice of the Lamb, sacrificed for our sins; each time we drink of the blood of the Lamb we renew the life of God within us.

Carmena Mallia, one of the orphans who at Fra Diegu Orphanage when Joseph De Piro was director of the orphanage, said:

“I remember how careful the Servant of God was to attend the weekly adoration regularly. In preparation for the Eucharistic Congress, we had weekly adoration every Friday, but after the Congress we started holding it on Thursday. De Piro never failed to join us. Whenever he celebrated Mass at orphanage, on special feast days, we were impressed by the devotion with which he celebrated. Not only did he live this devotion in his own life, but he also instilled it in us, children.”

De Piro speaks about his belief in the Eucharist in the sermons.

Without doubt, Jesus personally present in the Eucharist was another model for De Piro and his personal involvement in his charity towards the needy, his other model was the Incarnate Jesus. The Eucharistic expressions he used in his written sermons prove this. Some expression are only made up of a few words:

“The ultimate measure consists in the most intimate union with us ….” “… In the Eucharist, he unites himself with each one of us ….” “… Jesus, of Bethlehem, of Nazareth, in his public life, in his passion and death, in his glory is with us; your heart beats are his heart beats!” “What Jesus does to unite himself to us.” “… In the Blessed Sacrament of the altar we have our God so close to us, not figuratively, or as a shadow, but in reality.” “… Like a king among his subjects, like a father among his beloved children, like a shepherd among his sheep ….” “… Chose to be with us ….” “In the Eucharist and Communion, our soul becomes one with the soul of Jesus, his spirit becomes one with our spirit.” “… He lives in me and I in him, for eternity.” “… Jesus is with us ….” “… I am with you ….” “… Wisdom incarnate lives with us in the tabernacle ….” “… Jesus … continually yearns to be united with us ….” “… A king who visits his subjects ….”

Other quotes in De Piro’s sermons, about Jesus who becomes personally one with us in the Eucharist, are longer:

“… Communion is the most intimate union a creature can have with God. The ultimate aim of the Eucharist is our union with God…. Only the Eucharist has this union as its immediate objective.”

“Fire transforms anything it attaches itself to. The effect produced depends on the object that is burnt, eg. fire warms, boils, evaporates water; dries, flares up, chars, incinerates timber; turns red-hot, softens and liquefies iron. Let us now apply this to what we have been saying: in the Eucharist, the fire of divine love inflames all who, through Communion, get closer to Him and submit themselves to his action.”

“Jesus, a few hours before his death, surrounded by his disciples, instituted this sacrament and changed the substance of bread and wine into his precious body and blood, so that he could remain with us. Indeed, his presence is to be with us ‘It is my pleasure to be with the children of man’” (Prov 8:31).

“He acts like a father who gives himself completely over to his children; like a shepherd who, after giving up his life for his sheep, keeps on feeding them with his flesh. Since the ultimate degree of love is the union of the lover with the loved one, there is no greater intimacy than that between Jesus and the person who receives Communion.”