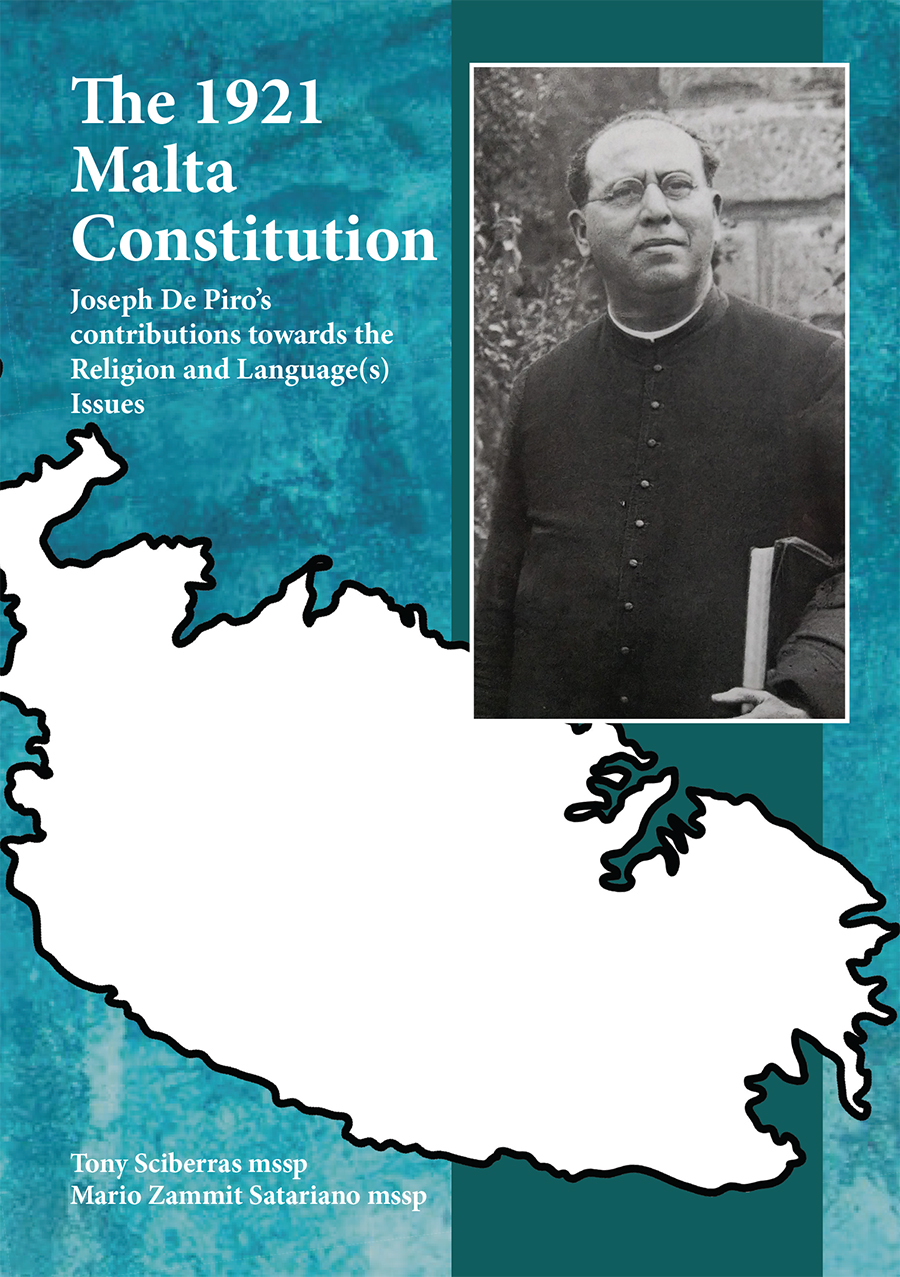 For the island state of Malta, April 30 was a special day; it marked the first centenary from the granting of its first constitution as a British Colony. Under this constitution, the Maltese were given a bi-cameral system of government to look after local affairs.

While this is a special event for Malta, for us who follow the charism handed down to us by the Servant of God Joseph De Piro, this marks one of De Piro’s achievements. In November 1918 a National Assembly was set up to draft a constitution to be presented to the British government for its approval and promulgation. This National Assembly was composed of representatives from various constituted bodies on the island. Joseph De Piro, Dean of the Cathedral Chapter of Malta, was chosen to represent the Chapter on this Assembly. At this stage, according to the Church Canon Law, the Cathedral Chapter functioned as the bishop’s advisory body, and therefore the Dean occupied a very important role in the diocese.

For this event, a book has been prepared to celebrate the contribution of the Servant of God, especially with regards to the question of the place of the Roman Catholic faith and of the official languages of the islands.

We would like to share with you this new publication The 1921 Malta Constitution. Joseph De Piro’s contributions towards the Religion and Language(s) Issues. We hope this will be another opportunity for us to appreciate De Piro’s ministry, his love for his fellow citizens, and his love for religion.

After a relatively stable period in Maltese history, when Malta and Gozo were an independent sovereign state under the governorship of the Order of St John of Jerusalem for 250 years, at the turn of the 19th century Malta fell first to the French, for two years, and then became a British Colony for the next 164 years.

The Maltese asked Nelson to come to their help and rid them of the French under Napoleon, which he did. In so doing they expected to be given back their independence, but the treaty of Paris in 1815 gave the islands to the British Empire, making them a British Colony. In 1835 Malta was given a Council of Government, but the executive government remained with the British Governor-General. Over the years the Council of Government, in the name of the Maltese people, constantly requested a constitution from the British Government with authority to make decisions in local affairs. This constitution was finally granted on April 30 1921 giving Malta a bi-cameral system of government to look after local affairs.

Within the Maltese Church, the Servant of God Joseph De Piro was a highly respected person. Not only because he came from a noble family, but also because of his personality. This can already be seen from the fact that the Bishop of Malta had tried to encourage De Piro to join the Ecclesiastic Diplomatic Corps by continuing his studies in Canon Law at the Ecclesiastic Academy. This could have led De Piro to become a secretary of the Apostolic Nuncio in some countries, and perhaps even be ordained a bishop and becoming a Nuncio himself. Joseph De Piro never wanted these titles and instead opted to return to Malta and work among the poorest of the poor.

In 1911, against his express wishes, the Servant of God was appointed Coadjutor to the Dean of the Cathedral Chapter of Malta. This was not simply a ceremonial position. At the time, Cathedral Chapters acted as the diocesan bishop’s council or senate. The Dean, the leader of that body, therefore held a high position in the diocese. When Archbishop Mauro Caruana OSB became Bishop of Malta, De Piro was delegated to represent him and take possession of the cathedral church in his name. The respect of the Maltese church towards De Piro can be seen in the fact that he was appointed Bishop’s Secretary, Seminary Rector, and Director of seven orphanages.

In an attempt to break the impasse between the Maltese and the British government, in November 1918 a National Assembly called with the aim of drafting a constitution to be presented to the British government for its approval and promulgation. This National Assembly was composed of representatives from various constituted bodies on the island. Many Church bodies sent their representatives. As Coadjutor Dean, Joseph De Piro, was chosen as one of the representatives of the Chapter on this Assembly. De Piro was further nominated to form part of a working commission to carry out the work at hand.

The Servant of God contributed to various discussions in the process towards the first Maltese constitution. This book celebrates Joseph De Piro’s contribution with regards to two very important issues: the place of the Roman Catholic faith in the new constitution, and the status of Maltese, English and Italian as the official language or languages of the islands. Because of his role as Coadjutor Dean, De Piro found himself in a very pivotal role liaising between the Cathedral Chapter, the Diocesan Bishop and the National Assembly. This was surely a very difficult job to carry, considering his heavy workload and his pastoral ministry. The Servant of God gives the impression that he was unstoppable and that nothing was too great for him to take on board. More importantly, this book demonstrates two very important aspects of Joseph De Piro’s life and spirituality. He was a person who was totally committed to his faith and to his Church, as can be seen from his defence of the place of the Roman Catholic faith in the new constitution. Yet his interest went far beyond faith, religion and Church; he was deeply interested in the good of his fellow Maltese sisters and brothers. De Piro believed in the person as a whole being, and a strong faith and a healthy spirituality could only be nourished and protected through a healthy civil life and culture. For Joseph De Piro, Protecting and defending the culture of the Maltese islands was just as important as protecting their religion, hence his insistence and defence of the Maltese, English and Italian languages as the official languages of the islands.