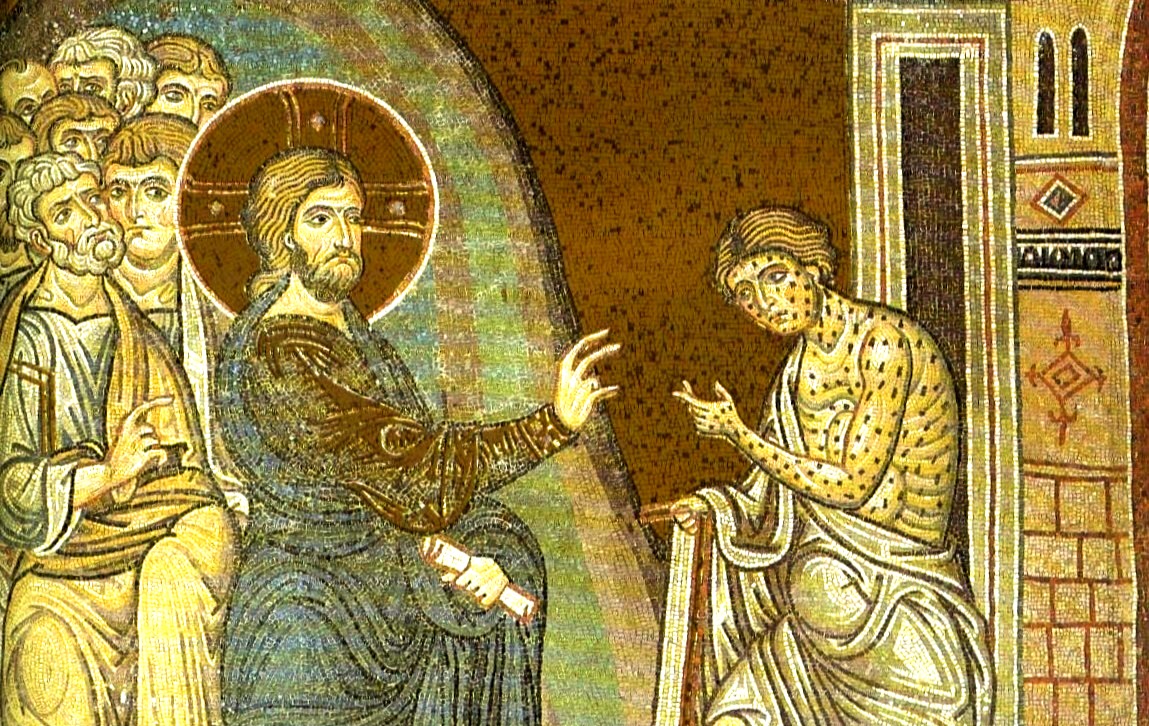 The liturgy of this Sunday invites us to reflect on Jesus as our healer. As we read in the first reading from the book of Leviticus, leprosy was a terrible disease. The people of God in the Old Testament did not know how to cure it and feared it to be highly contagious. Although to us it sounds very cruel, the only way to protect the community was to isolate anyone who was sick with leprosy.

Lepers were ordered to live outside the camp, wear torn clothing and disordered hair, so that their condition could easily be seen from a distance. Moreover they had also to warn anyone in the area by constantly crying out ‘unclean, unclean,’ while covering their mouth. What is even more unfortunate is, that since people had no way of diagnosing leprosy, every type of discolouration of the skin was considered as leprosy, and they were all forced to self-isolate.

In the gospel Jesus is approached by a leper with a request for healing. Jesus is not concerned with touching the sick person, he touches the man and heals him. Human touch does not only heal the person physically, but also spiritually! Human touch is such an important part of our relationship with others.

In the second reading Paul tells the Corinthians that they should take him as their example, because he imitated Christ. This is a good recommendation for us too. We too need to take Christ as our model and imitate him in the way we respect our sisters and brothers, especially those marginalised by our society.

If Joseph De Piro were to write an autobiography he would have undoubtedly started with these words:

The spirit of the Lord has been given to me, for he has anointed me. He has sent me to be father and mother to the girls and boys in the orphanages. To sustain boys and youths at the Oratory, Birkirkara in their various needs. To see that there is a provision to cover the needs of the seminarians at the Major Seminary, Mdina. To be a real ‘Padre’ to the members of his missionary religious society. To help the families of the girls and boys at the orphanages in their various needs. To support the girls and boys even after they had left the orphanages. To create social assistance for the employees of the orphanages, of the Cathedral School, Mdina and of the Major Seminary. To give alms to the many poor and miserable beggars, whether young or old, women or men. To help Maltese workers earn a just wage. To help Maltese families enjoy a decent living. To mediate for peace and concord between conflicting individuals or entities. To strengthen the faith of the young and old, women and men faithful in Malta. To rejuvenate the faith of the Maltese migrants, wherever they may be, and to announce God’s love to those who have never heard of it.

The Servant of God was a man who dedicated his life help others. Fr Augustine Grech mssp, one of the first members of the Society, said that “The natural attitude and disposition of the Servant of God towards others was affable, gentle, humble, compassionate and tolerant.” Grech added that “He was patient with his neighbours, compassionate with their defects ….” Fr Alexander Bonnici ofm conv, De Piro’s biographer, said that De Piro reached out not just to people in general, but especially to those who collaborated with him, members of his Society and those who took care of the orphanages under his direction.