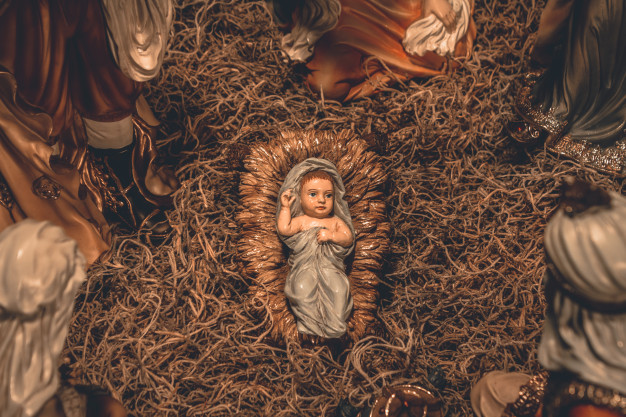 Christmas is the celebration of the Emman-u-el, God-with-us. The Word himself was made flesh and lived among us. In his gospel narrative of the birth of Jesus, Luke tells us that Mary had to give birth to Jesus in a stable, because there was no room for this to happen at the inn where they were staying. The new born Son of God was laid in a manger, a feeding trough for the animals.

Poverty and evangelisation are present at the scene in Bethlehem. Jesus set aside his being as God and stooped down to the level of humanity, not merely becoming human but even becoming a slave to humanity (cf Phil 2:1-11). The first people to pay homage to the new born messiah were the marginalised shepherds who roamed the fields tending their flocks. Jesus’ option for the poor was visible throughout his earthly life.

Jesus is the Word made flesh. The fullness of God’s revelation. Through his birth Jesus revealed to us the Father. He is the visible face of the invisible God. Throughout his life he preached God’s infinite love and mercy, finally revealing the extent of God’s love for humanity on his cross.

Being one with the poor and the marginalised, and preaching God’s word were the two pillars of Joseph De Piro’s life and ministry.

‘They shall name him Emman-ue-l, God-with-us.’

Joseph De Piro’s love for the materially poor and those lacking evangelisation is one image of God’s presence among us.

When we examine the life and activity of Joseph De Piro we notice that the Servant of God gave contributed immensely to the Maltese society, and the universal and local Church. Some of were minor services, which only committed the Servant of God for a brief period of time and involved only a little of his mental and physical energies. Other responsibilities required a greater commitment of time and energy. Ministries in this latter group were characterised by (1) his love towards the underprivileged of any sort, and (2) his love for evangelisation, starting with ‘the evangelisation to the faithful’ in Malta, continuing with the ‘re-evangelisation,’ ‘second evangelisation’ or ‘new evangelisation of the Maltese abroad, and his efforts at ‘first evangelisation’ or the ad gentes missions.

These two major contributions of De Piro are very important because:

(a) They occupied most of his time. Many of his other activities, such as his membership in many ecclesiastical and civil committees, implied only short periods of time. On the contrary, the Servant of God dedicated most of his time and energy for the underprivileged, especially in the orphanages, and in favour of evangelisation, especially through the foundation and strengthening of his Missionary Society.

(b) While he carried on other duties, he continued with the charitable activities and his evangelisation.

(c) In almost all his ministries, there was always the reflection of his love for the underprivileged and/or evangelisation. Here are some examples:

From 1904 to 1907, Fr Joseph De Piro was at Qrendi for health reasons. According to a priest witness, the Servant of God evangelised to the Qrendi priests and to those of the nearby parishes by helping in their ongoing formation which they lacked.

At a time when the teaching of religion, both for children and grown ups was lacking, the Servant of God regularly travelled on foot from Mdina to Mtarfa, to teach catechism to the children of that area. He opened allowed the catechist brothers to teach religion at the first small house of the Society in Mdina. In the orphanages where he was director, De Piro visited the catechism classes and examined the boys and girls before their first Holy Communion and Confirmation.

The Servant of God strongly objected to his being made canon of the Metropolitan Cathedral. The main reason was that he wanted to live the simple life of the poor and the needy.

As canon of the Metropolitan Cathedral, De Piro was frequently invited for liturgical and paraliturgical celebrations in various Maltese parishes. On these occasions he paid particular attention to preaching, he thoroughly prepared the sermons or meditations. He wrote down the whole sermon and tried hard to really communicate with the listeners. While the text is generally written in Italian, he often inserted the correct Maltese equivalent of certain words  to use the correct word when preaching.

The Servant of God was nominated director of the Sacred Heart of Jesus Workshop where girls who had left an orphanage could learn a trade and earn some money. Another charitable initiative.

During the years of the First World War, De Piro was asked to contribute by being the secretary of the Fondo Vescovile per pane ai poveri durante la Guerra (1914-1918) committee. This was obviously another charitable organisation!

Between 1915 and 1918 De Piro very faithfully carried out all his responsibilities as secretary to Archbishop Mauro Caruana. He gave special attention to the demands of the Maltese migrants in great need of priests and religious who could help them live their faith.

Between 1918 and 1920, De Piro was Rector of the Major Seminary, Mdina. During these two years the Servant of God practiced a lot of charity towards the seminarians who could not pay their fees. He improved the material aspect of the Seminary life and practiced justice with teachers.

De Piro formed part of the National Assembly (1918-1921). All along these years he lived his love for his fellow Maltese by the formulation of a draft constitution for Malta, one which enabled the Maltese to have self-government, something lacking until 1921. Quite clearly another type of need!

Joseph De Piro intervened in the Sette Giugno riots of 1919. He did not enter in the long history of conflicts between the British and the Maltese, but only at the moment when injustice was being inflicted on the poor people.

De Piro was made Senator in the Third Maltese Parliament (1932-1933). Here he only intervened twice. His first intervention was when he was asked to express his opinion about inheritances in favour of charitable institutes. The second intervention regarded in a special way the young girls who had just left some one of the orphanages and who had no family to go to.

De Piro accepted St Dominic Savio Oratory, Birkirkara, and became its director on condition that it continued to cater for the formation of the children of the common people.

The Servant of God cooperated with the Dame di Carità whose aim was “… to help the cases of poverty ….” Therefore a charitable initiative again.

He was a member of the Governing Board of the Malta War Memorial Hospital for Children. Quite obviously charitable!

In 1927 the Servant of God started the first ad gentes mission of his Society by sending Br Joseph Caruana to Ethiopia.

De Piro was the originator, author and publisher of the ‘Saint Paul: Almanac of the Institute of the Missions.’ This was a missionary publication.

In his speech on the occasion of the blessing of the foundation stone of the Society’s Motherhouse, St Agatha’s, Rabat, the Founder referred to the scope of this House. It was to serve as a home for the formation of missionaries.

De Piro was very close to the Franciscan Sisters of the Heart of Jesus. Their foundress, Madre Margerita De Brincat, called him ‘superior general and father.’ The assistance he gave these religious sisters was not so much because they were religious, but rather because they ministered at Fra Diegu Orphanage, an ecclesiastical charitable institute. In the ‘Saint Paul; Almanac of the Institute of the Missions’ the Servant of God used to write short information about these sisters. He promoted the missionary activity these nuns were doing in Ethiopia.

De Piro helped Guzeppina Curmi and her companions to found the Congregation of the Missionary Sisters of Jesus of Nazareth. He did this in view of their main aim, the Jesus of Nazareth Orphanage. He also helped the Sisters introduce a missionary spirit in their constitutions.

He aided the Daughters of the Sacred Heart to set up and strengthen their religious Congregation. The help he gave them was already a charity in itself. Then they were founded to help in the education of the children of the poor.

(d) When De Piro thought of the poor he also considered evangelisation, and vice versa:

When the Servant of God planned to go to St Joseph’s Orphanage, Malta, he also thought that from that place he could start a missionary society.

He worked for the care of poor children, the main aim of the Oratory, Birkirkara. There he also started the aspirandate for prospective members of his missionary society.

While dedicating himself to St Joseph’s Orphanage, Malta, he started the novitiate for the Brothers of his society there.

Like St Paul, Joseph De Piro could have said that he has become all things to all.