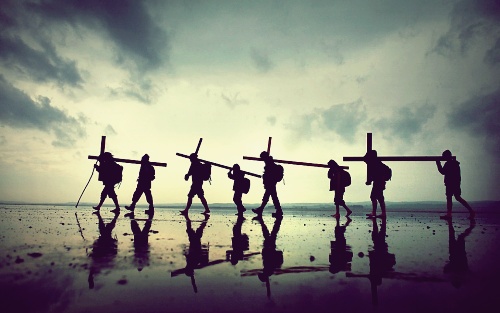 The Jews believed that the Christ, a descendant of the house of David, was going to be a great king in the tradition of David. The Christ’s role was to set the people of Israel free. Jesus wanted to clarify what his role was. His role was indeed to free the people of Israel, and all the people of the world, not from any earthly power, but from the power of sin, making them children of God. This was not to be achieved by power and strength, but on the cross, through his suffering, death and resurrection.

To be a follower of Christ, I too need to take up my cross: “If anyone wants to be a follower of mine, let him renounce himself and take up his cross and follow me!” There is no other way to salvation except through the cross.

Joseph De Piro accepted this challenge and lived it out in his life.

Joseph De Piro had to ‘carry his cross’ and accept many sufferings during his life.

In his writings, he admits that his academic abilities were rather limited;

During his studies for the priesthood, he was diagnosed with Tuberculosis on two occasions;

After his priestly ordination, he had to go to Davos, Switzerland, to recover from his illness. His wish had been to go to Malta and start preparing for the foundation of his missionary congregation;

Other Maltese priests did not understand the need for another religious congregation in Malta;

Many young men who joined the society, left after only a short period of time;

The first member to be ordained as a priest, left the society soon after his ordination;

The Vatican authorities did not understand the main aim of his society;

Some of the officials in the Maltese bishop’s office, created obstacles in process of building the Motherhouse of the society.

Joseph De Piro was aware of these difficulties. He acknowledged these and many others and accepted them as his crosses. He carried these crosses full of hope that the Lord would stick to his promise. Speaking about the death of his father De Piro wrote: “God always acts perfectly and his actions can only be the best. On that occasion we received so much consolation and I do not hesitate to state that, our consolations surpassed the pain of the misfortune.”