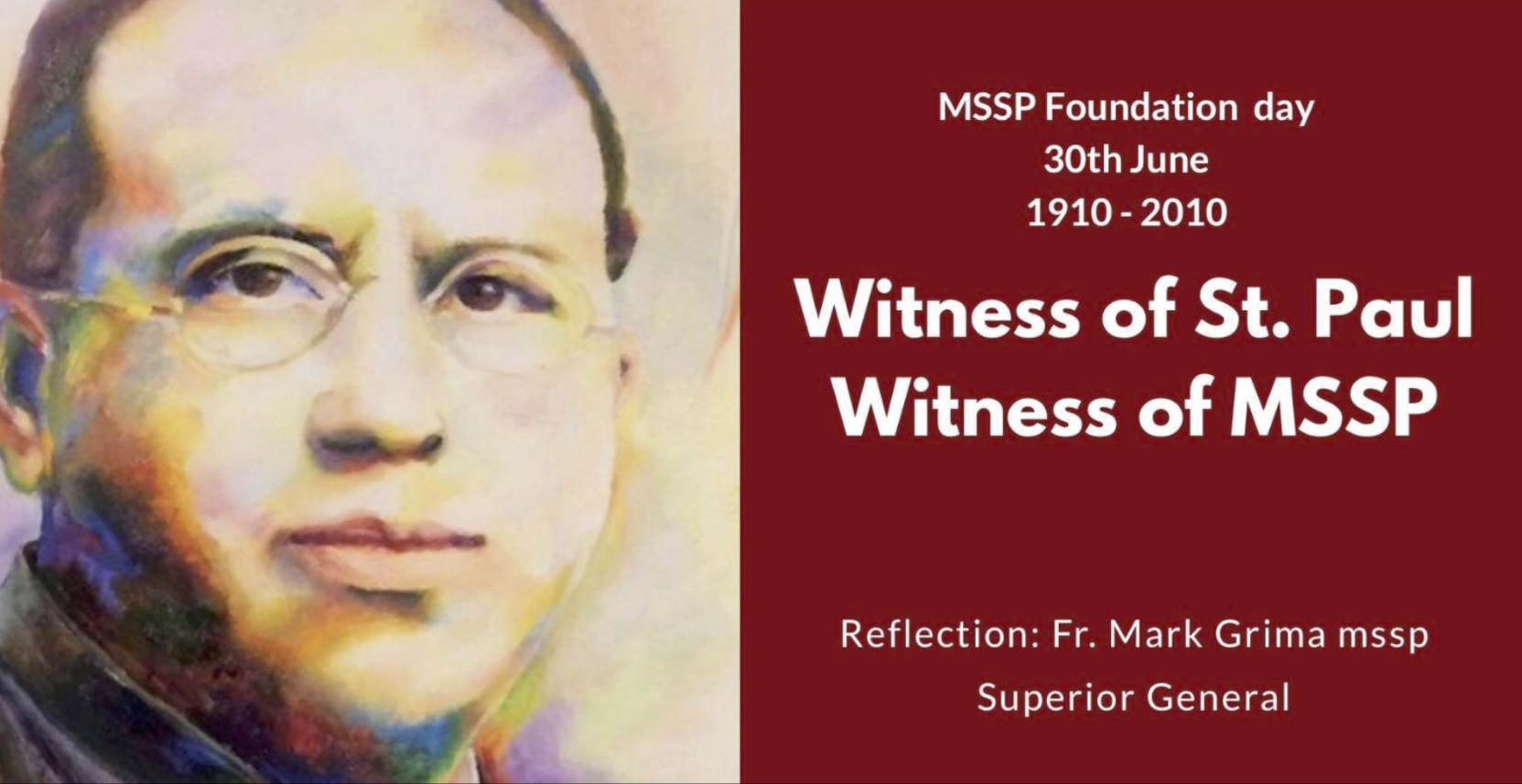 The 30th of June marks the foundation day of our congregation the Missionary Society of St Paul. Our founder Joseph De Piro in 1910 opened the first community of our congregation dedicated to St Paul, the patron of our society. The 30th of June was not chosen haphazardly by the founder, it was a particular day very much to the heart of our founder, very much close to the charism of our Society because at that time the church celebrated the martyrdom of St Paul. On the 30th of June the Church celebrated Paul’s life to God, Paul’s life to the church, his martyrdom. And it was on this date that Joseph De Piro received two young man who were attracted to what the founder was calling them to be, missionaries. Called to evangelize the others not only in Malta but outside the country, to all the countries where God was calling them.

After that the first communities had to go out of Jerusalem and were spreading gradually in different countries there was great persecution and many communities really experienced it in the flash that some of their members were killed for their faith. This blood of the martyrs is called the second baptism, was something essential for the Church to start its life of evangelization. In fact, we find quite a number of writings from the early church fathers pleading with the community not to intercede for them when they are called to martyrdom. Not to protect them. What is this all about?

This is something that might look so stupid to the world – to give your life to be killed. Yet for the first Christians, the martyrdom (here we are speaking also about the martyrdom of St Paul) was real.  St Paul himself write in his letters that he ran the whole race, now what awaits him is to give his whole life to Christ, to be crowned with Christ. What’s all this fascination with martyrdom?  The thing is this, that the first Christians were not attracted to suffering, were not attracted to pain or to death. There was something else that was their attraction.  It was Christ. It was Christ who attracted them, who made them do things that for the world they looked foolish.

So to be a missionary, and I am sure that our founder Joseph De Piro had this in mind, meant to go through life through the life of Christ, to be attracted to Christ and everything that we do, we do it through this attraction. There is no love without attraction.  Even in our ministry as missionaries we don’t love the poor for being poor, we don’t love poverty. These are things that we can do without. Humanly speaking we prefer other things, but why do we give our lives, why do we let go of all that belongs to us to give ourselves to others as missionaries both religious and lay. Why?

My dear brothers and sisters as we celebrate today the foundation of the Missionary Society of St Paul we are called as followers of Joseph De Piro, or better, more than followers – people who have at heart the charism given to Joseph De Piro our founder, whatever we do in our life we do it out of love for Christ. There should be no other attraction other than Christ. Sometimes we are really tempted to do a lot of good things and people might look at us with awe and wonder why are we doing so many things, so many projects, so many works. But we have to be careful to make sure that our love is not for the works, our love is not for the projects, and worse if our love is for ourselves. This is not the life of the missionary. The life of the missionary, the ones that Joseph De Piro had in his heart (and wanted to follow Christ with him) are the ones who love Christ, and loving Christ, being attracted to Christ is not easy. It’s not something that once we have it’s ours. No. It is life and like all life it has its ups and downs. So, we have to make sure that as missionaries our life is a life of prayer. We cannot do without prayer. We cannot do without relationship with Christ. If we are missionaries with no relationship with Christ, the people we attract, we attract them because of us. They are attracted to us and that’s not missionary work. We need to be attracted to Christ so that whoever looks at us and is attracted to Christ, and follows Christ.

So, my dear brothers and sisters, while we celebrate this anniversary, which is more than an anniversary, it’s a reminder for us, for what we stand, for what the founder really gave his life. He did not die the traditional martyrdom but our founder had a lot of deaths so as we can be born. Out of the blood of the martyrs the Church was born. Out of the martyrdom of our founder, the many suffering he had to endure, we were born – religious and lay who are attracted to the spirituality given to us by the Holy Spirit through our founder called to become martyrs for others like St Paul, in today’s world. Letting go, giving up everything that the world holds dear for something much greater – CHRIST.

The peace of the Lord be with you.

Transcript of the above video.