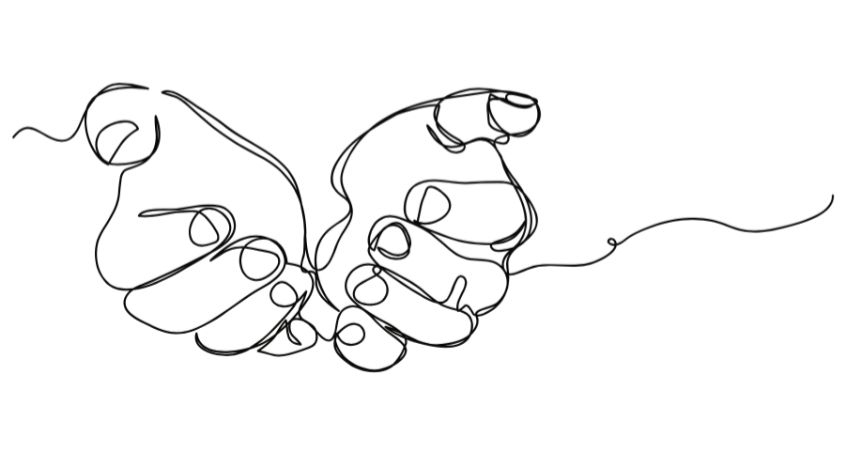 Jesus came to a village, and a woman named Martha welcomed him into her house. She had a sister called Mary, who sat down at the Lord’s feet and listened to him speaking. Now Martha who was distracted with all the serving said, ‘Lord, do you not care that my sister is leaving me to do the serving all by myself? Please tell her to help me.’ But the Lord answered: ‘Martha, Martha,’ he said, ‘you worry and fret about so many things, and yet few are needed, indeed only one. It is Mary who has chosen the better part; it is not to be taken from her.’

Martha and Maria. This Sunday’s Gospel is about these two sisters. The exegetes of the Middle Ages considered them as two separate icons for the apostolic and contemplative religious respectively. Thank God, especially since the last years of these same Ages there were spiritual masters who did not separate these two charisms; they preferred the contemplation-in action spirituality.

Life is a pendulum, always moving from one side to the other. There was a time when a lot of importance was given to prayer and at the same time the apostolate was considered as irrelevant. There came a time when we Christians realised that we were making a mistake; we therefore started giving priority to pastoral work and abandoning prayer. It was not infrequent that we thought that we had to choose; we thought that we could not be both, and at the same time, Martha and Maria. Fortunately, in the meantime there appeared certain individuals who indicated to us that while a person might be called by God to be more Martha and another one to be more Maria, at the same time no one could be only Martha or only Maria; one could not be only active or only contemplative. Among those who insisted on this there was St Ignatius of Loyola. He cannot be considered as the initiator of this movement, but he can be said to have promoted in a special way the contemplation-in- action spirituality.

De Piro contributed a lot to the local and universal Church and in the Maltese society. At one period he was involved in about 53 ministries. At the same time, he was continuously one with God. He could unhesitatingly say, “The Spirit of the Lord is in me”. The Lord in him was the heart that was animating all his thoughts, words and deeds.

It was since early youth that Joseph De Piro had wished to be united to God. And this in a complete way. He was not yet 21 years of age when he put down in writing the pros and cons exercise in relation to his choice of vocation. In it he put down these words: “My wish to give myself entirely to God …”

In the discernment exercise for the choice between the Academia and St Joseph’s Home, and therefore when he was going to start his third year theology and when he was 25 years of age, Joseph thought that, returning to Malta after ordination, he would go to St Joseph’s Orphanage to help the other two priests with the poor boys there.  Therefore, in his third year theology the Servant of God wrote down the reasons in favour of his going to the Institute and against what Archbishop Peter Pace had offered him, the “Church Academy”:

The second reason against attending the Academia: “When God chose me for the priesthood he found me among sinners. Now if he decides to call me for something else he may find me among the elected ones.”

Number 8 says: “I experienced great consolation when thinking that I have chosen with Jesus the crown of thorns instead of the one of roses.”

Number 5 of the reasons in favour of going to St Joseph’s Orphanage: “So that I can imitate Jesus more closely.”

Number 8 in favour of the orphanage: “ So that at the moment of death I can be comforted by the fact that I have suffered a bit for Jesus after he had suffered so much for my sins.”

But the biggest declaration written by the Servant of God regarding his commitment to be one with the Lord was his “I follow you wherever you go”. In 1905, a little while after his return from Switzerland (1904), Fr Joseph had already started sharing “his already old ideas” with some of his Maltese friend-priests. Among these there was Fr E. Vassallo of St Joseph’s orphanage. The latter asked the Founder to put his ideas in writing. For a while De Piro was unable to do this, but between 31st July and 7th August 1905 he succeeded to do so: he presented the nature, aim and spirituality of his future congregation. In number 5 of these elementary statutes De Piro put down these exact words: “For the time being we do not make neither vows nor oaths, but we must be available to do God’s will with the greatest generosity. Our rule of life must be ‘I follow you wherever you go.’”

The fact that the above words make part of the Society’s “first statutes” may mislead the reader of the Diary. The latter may easily get the impression that the author is addressing his “discipleship” only to the members of his future Society; the Founder may seem as not including himself in this “programme”. But in fact De Piro is challenging even himself with this consecration: he uses such words as “we must” and not “you must”; “Our” and not “your” – “… we must be available to do God’s will with the greatest generosity. Our rule of life must be …”

Several witnesses who testified in the Diocesan Process of the Cause of Canonisation of the Founder declared that, Joseph De Piro was really a “Man of God”. On 15 May 1987 Fr Augustine Grech, one of the first members of the Society, testified that, “… externally it could be noticed that he was continually in the presence of God.” Grech repeated almost the same thing some fifteen days later. Br Felix Muscat, another member of the Society, said almost the same thing. Fr Louis Gatt, also a member of the Society, verified what was said by Grech and Muscat, “… I noticed that God was always in his mind …” Br Venanz Galea, another member of De Piro’s Society, indicated where he noticed the Founder’s union with God, “The Servant of God was a man of great supernatural faith. He impressed us very much (and much more than others did) when he spoke to us either together in instructions, homilies, etc., or individually. He seemed a man divinely inspired and of deep convictions.” In 1987 Sr Marie De Piro, one of the nieces of the Servant of God, testified that her uncle was a person very close to God. She could see her uncle’s union with God in his apostolate, “To serenely and competently fulfil so many seemingly incompatible commitments could only be the fruit of a deep union with God…” After referring to her uncle’s capability to give advices and his dedication to his ministries, the same Sr De Piro said that, “I would now say that Uncle’s wisdom and prudence came from his union with God, and were not simply the fruit of his natural qualities and character.” Msgr Paschal Robinson, who was in Malta between 3rd April and 2nd June 1929 as Apostolic Delegate during the politico religious conflict between the Church and Sir Gerard Strickland, spoke about the Servant of God to Fr Daniel Glavina sj. For Robinson, De Piro was “a man of God.” As was for Fr John Vella, the first priest of the Society, for Fr Raphael Azzopardi OSA, for the two ex-members of the Society, Mr John Vella, and Mr Victor Tedesco, for Fr Arthur Vella sj, a nephew of the just mentioned Fr John Vella, for Sr Marie De Piro and for John Buhagiar, an employee at St Joseph’s, Malta. Fr Azzopardi also said that the other religious in Rabat, Malta, had the same impression about De Piro.

Especially by doing his will

De Piro was always attentive to listen to God’s voice. He believed in this Word so much so that his life was programmed on this same divine Voice:

Joseph tried to listen to the Word of God in “sacred moments”: As when he was in the Jesuit Church, Valletta, on 8th May 1898, for the Prayer to Our Lady of Pompeii. Here he was praying and therefore one expects that Joseph was attentive for God’s voice.

At other moments one does not expect that the Servant of God was attentive for the Lord’s voice. Examples:

on the occasion of the death of his father, which ended up in making Ursula a widow and nine children orphans;

the sickness and then the death of his brother Berti;

in the ill health he experienced in Rome after he had abandoned the nobility with all its riches, high positions in the Maltese society, the military career, his artistic talent, a  professional career, etc.

in the sickness he experienced even after his priestly ordination, so much so that he could not return immediately to Malta and start his pastoral life;

in the discouragements caused by his companion priests when approached about the nature and aim of the Society;

in the youths who used to join the Society, but used to abandon it after getting a good education;

in the doubts, uncertainties and discouragements caused by the ecclesiastical hierarchy, re: the aim of the Society;

in the first priest of the Society who abandoned him only four years after being ordained presbyter (1919-1923);

in the Curia, officials who created for him so many difficulties about the building of St Agatha’s Motherhouse.