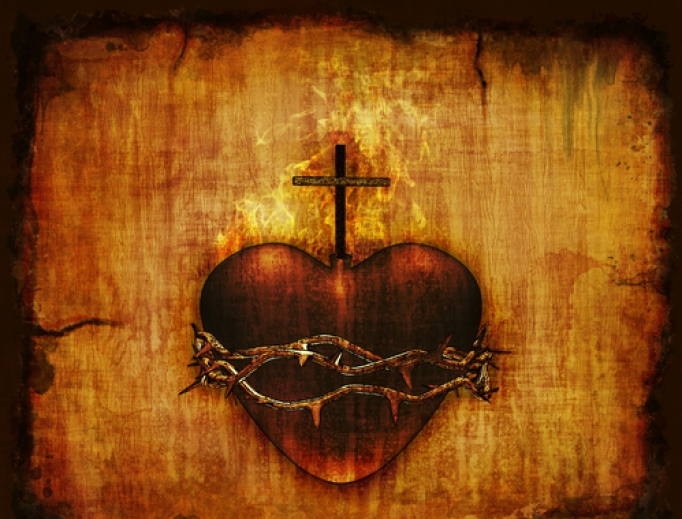 Jesus spoke this parable to the scribes and Pharisees:

‘What man among you with a hundred sheep, losing one, would not leave the ninety-nine in the wilderness and go after the missing one till he found it? And when he found it, would he not joyfully take it on his shoulders and then, when he got home, call together his friends and neighbours? “Rejoice with me,” he would say “I have found my sheep that was lost.” In the same way, I tell you, there will be more rejoicing in heaven over one repentant sinner than over ninety-nine virtuous men who have no need of repentance.’

The Servant of God Joseph De Piro preached a number of times about the Sacred Heart of Jesus. Here are some of his writings:

The Sacred Heart of Jesus: God who loves through his Son, God’s love that saves; “God for us.”

The Sacred Heart of Jesus was for the Servant of God nothing less than the abode of the divine love and therefore that which saves us continuously. “But where did this divine love dwell after coming down from heaven?” asked the Servant of God in one of his sermons. De Piro himself gave the answer: “It inhabited the Sacred Heart, that most noble part of the human nature that had been united to the divine – it inhabited the most Sacred Heart of Jesus. As the rudder guides the ship, so also does this divine heart, full of love and coming down from heaven; it guides all the thoughts, all the words and all the actions of Jesus. It is because of this that the gospel composed the most beautiful eulogy: “He passed by doing good everywhere.”

Even without the crucifixion, there would have been place for devotion to the Heart of Jesus in itself:

“For our redemption it was enough that the Sacred Heart of Jesus produced the blood and gave life to the body of Jesus, thus making it possible for him to do human and divine acts at the same time, since every free act of Our Lord Jesus had an infinite value and therefore could redeem us without any suffering.”

However, it is the suffering of the Sacred Heart that reveals Jesus’ love to perfection, “It is the same with Jesus. Tell him that he could have saved a drop of blood with which his Divine Heart functioned. He could not.”

On 22 August 1916 De Piro wrote to Cardinal Filippo Giustini, Prefect of the Congregation of Rites, requesting the permission to ordain some members of his Society with the title of missions; De Piro wrote:

“From the beginnings to this very day, each day has had its heavy burden. I have had disappointments and suffered humiliations. Three students, who I trusted, left the Society, and their departure has hurt me, for they had been considered quite promising. Yet, Divine Providence has never failed to lighten my burdens. I do not wish these events to overshadow others which have given me great happiness.”

On 3 October 1932 the Servant of God organised the laying and blessing of the foundation stone of the Motherhouse, St Agatha’s. In the welcoming speech he said:

“‘If the Lord does not build the house in vain do the workers labour.’

These divine words kindle total trust in us, without any reserve, in God’s help. Better still, they give us strong faith in the first movement of the Principal Agent. They were already chosen and placed at the beginning of the rules which guide the new Missionary Institute which gathered us here for the benefit of its increase and prosperity. These words are no less fitting and worthy to be remembered today.

As everybody knows, Your Grace, God’s works and not ours, bear contrariety as a sign and as an ornament. For the span of about fourteen years, in the work we have here before us and in our hands, there have been so many difficulties, one after the other, that they could have exhausted anyone. Yet, since it was God who set to work at the task, His servants never lacked courage. Moreover, like a firm and sweet breeze God’s Spirit blew in the sails of our poor boat, troubled by the waves.”