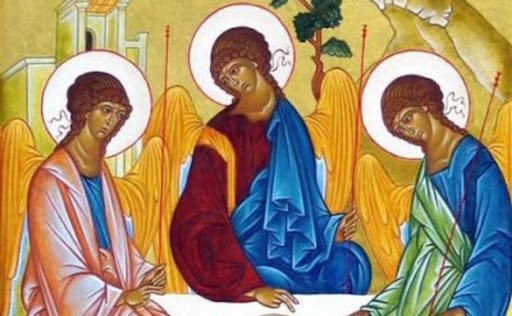 As we celebrate Trinity Sunday, we look at God as a community of persons. The Holy Trinity can only exist because the three divine persons are continuously in relationship with each other. Moreover, we were created by the Holy Trinity in its image and likeness. As consecrated religious, we are called to live the Trinitarian Communion (cf. Vita Consecrata 41ff).

The Servant of God Joseph De Piro lived and promoted this Trinitarian image and likeness:

On 5 April 1902 De Piro wrote in his Diary that the Bishop of Malta, Archbishop Peter Pace, had tried more than once to persuade him to continue his studies at the Ecclesiastical Academy for the Sons of the Nobles. The Servant of God also wrote that during the retreat in preparation for his diaconate, started on 11 December 1901, he had already decided to abandon the idea of going to the Academy and instead join the priests working at St Joseph’s Orphanage, Malta. He also noted that he had arrived at this decision after making another discernment exercise. Aamong the reasons in favour of going to St Joseph’s Orphanage, De Piro wrote: My preference to live in community with other priests, and thus I should be happy to be able to live with the two priests that already run St. Joseph’s Home.

Joseph De Piro was already indicating that it was not enough for him to do pastoral work. He wanted to do ministy in communion with others. In his work at the orphanages under his care, De Piro was in unity with the Bishops of Malta and Gozo. Although since his first year of studies in Rome, the Servant of God had desired to settle at St Joseph’s Orphanage after his ordination, he also wanted to do this in unity with his Bishop, I declared, therefore, that I was ready to obey the Bishop.

St Joseph’s Orphanage in Hamrun, Malta, was very important for De Piro. He admits that he felt within himself that a new society under the patronage of St Paul could be started from this orphanage. When he returned to Malta in 1904, he tried to find other priests who could join him in his project of starting a new congregation. When in 1907 Joseph De Piro was appointed director of an orphanage, this was not St Jospeh’s Orphanage, but Fra Diegu Orphanage, a home for orphan girls. De Piro obeyed. Fifteen years later the Servant of God was asked to administer yet another orphanage, Jesus of Nazareth Orphanage in Zejtun, another home for girls. Once again De Piro accepted wishing to collaborate with his Bishop. On 23 November 1922, Fr George Bugeja, the Director of St Joseph’s Orphanage, died suddenly, and Joseph De Piro was finally nominated as its director. Again, De Piro showed his unity with his ecclesiastical superior and accepted this nomination.

Joseph De Piro was also invited to open an orphanage in the island of Gozo. To this aim, De Piro was regularly in contact with Bishop Michael Gonzi, Bishop of Gozo. At first there was some disagreement between the Bishop and De Piro. De Piro was not ready to accept the statutes Gonzi had prepared for the orphanage. After a number of meetings and some correspondence, Gonzi accepted De Piro’s views and the new orphanage could be opened on 21 May 1925. At the opening, De Piro addressed the Bishop expressing the continued bond between the two. His words there continued showing his bond with Gonzi:

It will never be that I omit in my speech the apposite attitude. Many heartfelt thanks to You for your generosity and self-denial with which you welcomed in your Diocese a branch of St. Joseph’s Home of Hamrun.

De Piro assisted Guzeppina Curmi, Foundress of Jesus of Nazareth Orphanage. Mother Teresa Degabriele, one of the first members of the orphanage, said that, De Piro used to come to our orphanage once a month. After joining us for lunch we used to spend some time talking. I, Mother Teresa, was in Hamrun. When De Piro visited our orphanage, the Foundress used to inform me, and I went to Zejtun. Both of us met with De Piro.

Even before being appointed director at St Joseph’s Orphanage in Malta, the Servant of God was often communicating with Fr Emmanuel Vassallo and Fr George Bugeja, his predecessors as directors of the orphanage. While still in Rome he regularly corresponded with Vassallo. He was also in regular contact with Bugeja as they talked about the Society he wanted to start. When Fr George was Director of the orphanage, De Piro was often invited to replace him while he was away on holidays. Later, when he had started his new Society, Bugeja would often ask De Piro to send members of his Society to replace the De La Salle Brothers looking after the boys.

The Servant of God communicated regularly with those in charge of the day to day running of the orphanages. He collaborated with the Franciscan Sisters of the Heart of Jesus who looked after the girls in Fra Diegu Orphanage and these Religious Sisters even sought his help with regards to their own Congregation. Similarly, the respectful bond that existed between the Servant of God and the Sisters of Jesus of Nazareth led the latter to seek his help during the foundation and first years of their Congregation. Moreover, the Servant of God entrusted his new Home for infant boys and girls, close to St Joseph’s Orphanage in Hamrun, to the care of the Sisters of Jesus of Nazareth. Finally, he worked in favour of the orphan boys in St Joseph Orphanage in Malta and in Gozo together with the members of his own Society.

De Piro was chosen as the first of four Canons to represent the Cathedral Chapter in the National Assembly of 1918-1921, led by Sir Filippo Sceberras to write a draft a new constitution for Malta. The Assembly met the first time on 25 February 1919. On 7 June 1919, during the second meeting of the Assembly, a riot took place in Valletta. The members of the Assembly were requested to intervene and to help calm the mob. Out of the 270 members only a handful offered to help; the Servant of God was one of these. In this role he collaborated with the other members and mediated for peace.

De Piro wished to set up a Society which, apart from being missionary ad gentes, also worked among Maltese expatriates. As his Society was still small, he could not send members among the expatriates, so he assisted those who requested help for the Maltese migrants by collaborating with diocesan and religious priests and also assisted some of these to go abroad.

The Servant of God wanted to work among those who had not yet heard the Good News of the gospel. To achieve this, he worked towards the setting up of a new Missionary Society. He also published an almanac, Saint Paul: Almanac of the Institute of the Missions where he printed many articles about the ad gentes missionary activity of the Church. In this field he also worked with Fr Angelo Mizzi ofmcap, and the other Capuchin Friars in Abyssinia. He helped these missionaries by sending his first missionary, Br Joseph Caruana ssp, to work with them. The Founder continued to support Caruana through letters and by setting up Sant’Agata’s Workship and the Missionary Museum to guarantee for his material and spiritual support. De Piro also published many articles in his almanac speaking about the missionary activity of Br Joseph.

De Piro returned to Malta from Switzerland on 2 March 1904. He still intended to join Fr Emmanuel Vassallo at St Joseph’s Orphanage, Hamrun. In January 1905 he spoke about this to Fr Ferrara, his spiritual director, and asked him whether he should tell Vassallo about his intentions. Ferrara encouraged De Piro to speak to Vassallo. De Piro met Vassallo in January 1905 and spoke to him about his desire. Since the wish of the Servant of God included the foundation of a missionary Society, it was not that easy for Vassallo to immediately invite De Piro to go and stay with him at the orphanage. Moreover, Vassallo ended his directorship of the orphanage in October 1905 and was succeeded by Fr George Bugeja. De Piro spoke to Bugeja about his project in December 1906. Again time passed and not much was done. In February 1907 De Piro and Bugeja agreed that if they were to invite other priests to join them they would not mention the vows, but only the formation of a community.

On 7 August 1905 De Piro wrote if, by the help of God and of the Virgin, the Society is started, this must be perfectly so. For a society to be regular members had to profess the vows. In 1015 the Founder introduced the promise of the vows in the profession formula of the first two members of his Society, but also insisted on the community aspect.

De Piro, started the section about charity with these words:

Each one must hold high the necessity to maintain among us the close bond of reciprocal love. The more united the members of our Society are, the more the Society is vigorous, and will be more apt to promote the glory of God and the salvation of humanity.

The Servant of God spoke about communion in his spiritual testament:

Therefore I urge all members of the Society of St Paul – whether they be superiors or subjects – to do their utmost to keep alive among them mutual love in Christ, and to believe wholeheartedly that nothing gives greater glory to God, better contribute towards the well-being of the Society and towards the spiritual good of each one and of our neighbours, than the observance of the words of Our Father St Paul: It is love that builds us up (1 Cor 8:1).