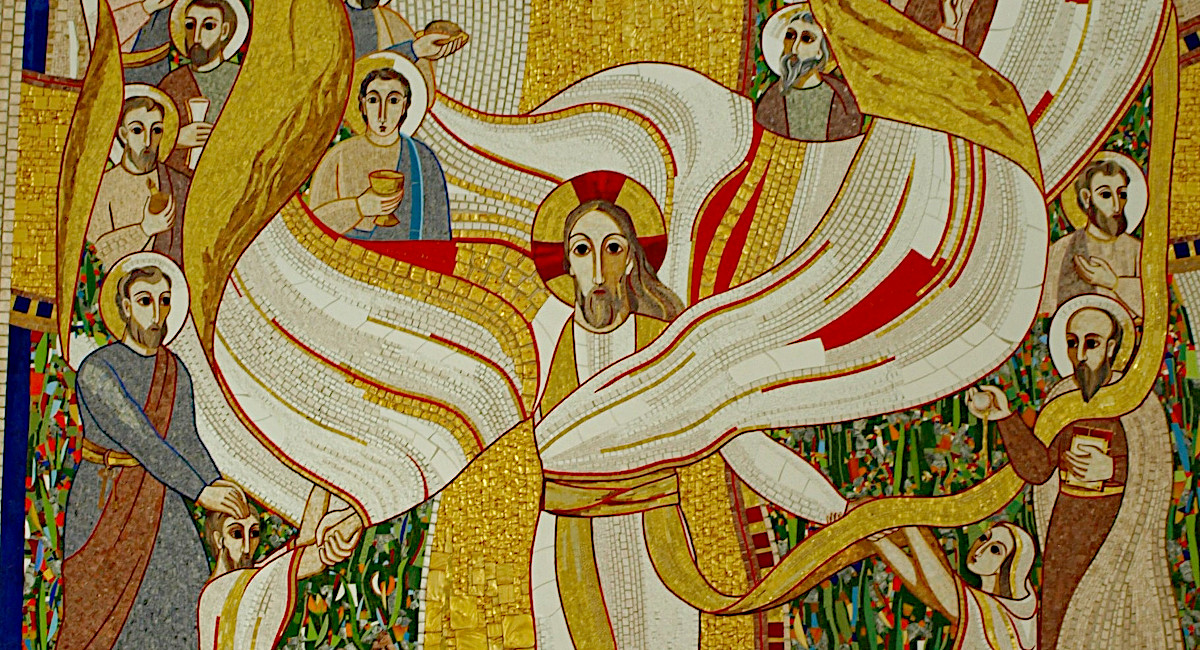 It was very early on the first day of the week and still dark, when Mary of Magdala came to the tomb. She saw that the stone had been moved away from the tomb and came running to Simon Peter and the other disciple, the one Jesus loved. ‘They have taken the Lord out of the tomb’ she said ‘and we don’t know where they have put him.’

Each of the four Evangelists have their own version of the narrative about women visiting Jesus’ tomb early on the first day of the week. Despite the differences each of the Evangelists mention the words of the angel words: “Why look among the dead for someone who is alive?”

The Servant of God Joseph De Piro was a contemplative and could therefore experience the risen Lord even when faced with a tomb that was totally completely barred:

Since Joseph tried to listen to God’s voice even at the death of his father, which left his mother a widow and himself and his eight brothers and sisters without a father, God who incarnated in him through his contemplation, gave him the possibility to see:

what God wanted of him as regards his own vocation, and

that God’s consolations were greater than the sorrow he experienced.

On 22 December, some months after the death of his father, Joseph, at the age of 21, wrote to his family: “According to our judgement, last year was an unfortunate one; I say this because God acts in a perfect way and his actions cannot be but the best. On that occasion we were so consoled that I say would say without any hesitation that the consolation surpassed our pain.”

Almost eighteen months after the death of his father, his brother Berti also died. Again Joseph wrote to his mother on 15th May 1899: “It seems that God and the Virgin Mary have not forgotten us because they frequently offer us circumstances through which we can increase our hope in them. With regards to Berti, we can say without any hesitation, that he is in a better place than us, because he is near the other good people who have already departed …”

Since Joseph listened to God’s voice even in the ill health he experienced while he was studying in Rome, God who was incarnate in him, granted him the possibility to realise that he was not destined to remain in Rome for further studies, as he had in fact written to his mother a few days after he had arrived there in 1898. He also realised that God’s will for him was not to progress in the Church hierarchy, as Archbishop Peter Pace wished him to do: “As regards intelligence, I am not exceptional. Until now I have managed. I almost failed two out of my three exams. So, if I think about my abilities, and remember the difficult exams ahead of me, I must admit that I do not have so much chance of any further degrees.”

As a newly ordained priest, Joseph listened to what God was telling him even through the sickness he experienced once again after his priestly ordination, stopping him from returning to Malta to start his pastoral work. God, who seized young Fr Joseph, gave him the possibility to realise that he had to rely totally on him, and let him lead the way:

“amidst the icy Alpine mountains, so far from the land where I hoped to realise my dreams,” he could do nothing about his “plans I have matured in me for so long.” “I was left with nothing but prayer – my most intimate friend. And I prayed, prayed and prayed.”

Joseph tried to discover what God wanted to tell him even when other priests tried to discourage him when he approached them about the foundation of the Society. De Piro realised that it had to be the Lord who built the house. He therefore quoted Psalm 126 at the beginning of each section of his Constitutions, and repeated this quote more than once in his address at the laying of the foundation stone of St Agatha’s Motherhouse.

The Founder tried to listen to God’s voice even when some youths who had joined the Society for a little while, left after a few years. God within him inspired him to feel that for him it was enough that these youths had received some education. Mgr Antonio Buhagiar said that the Servant of God used to send those aspiring to join the Society to St Aloysius College, to study for the Matriculation Exam, and then accept them into the Society. They received free education, thanks to the generosity of the Jesuits who ran this college. Unfortunately, some of these boys abused this arrangement and left the Society soon after having finished their secondary education. With their education they could land a suitable job after acquiring the necessary qualifications. Once I told him, ‘Can’t you see that you are being deceived? These boys are only interested in receiving a good education to enable them to find a job.’ De Piro always answered with his usual calmness, ‘I do not care if they are doing this. I am happy that they will have acquired a good education; they will benefit from it. Jesus never forced any of his disciples to stay with him, who am I to request anything different? God knows how to make use of their education. One day, the good they have received will produce fruit.’

Not only students left the Society, even the first priest left four years after his ordination. The Founder had depended on him heavily. This priest narrated how the Founder responded when this priest received the permission to join the diocese. Vella said: “He approached me, looking downwards, and told me, ‘The Bishop has accepted you in the Diocese.’ ‘What do you mean?’ I asked, this came as a shock to me. He left me on my own, went to the chapel, knelt down and stayed there praying, resting his head in his hands.”

The Servant of God tried to discover God’s will in setbacks caused by the ecclesiastical authorities, when discussing the principal aim of the Society. God who had made his abode in him showed him clearly that he had to remain faithful to the divine will, and to continue with his plans, even when the results were not forthcoming.

The problems did not stop with the founding of the Society, yet in all these problems he always noticed God’s hand at work. Fr Augustine Grech narrated: “During meals he used to ask us to share our dreams. Once he told us his own dream. He told us that he found himself on a big ship together with many people from different nations. Suddenly the ship’s propeller stopped working. The Founder went into the engine room to fix problem. While he was there, a woman approached him and told him to go back on deck, she was going to fix the propeller herself. Suddenly the ship started moving again. The Founder believed that the woman was St Agatha.”

The Servant of God was chosen to represent of the clergy in the Senate of the Third Maltese Parliament (1932-1933). During the nine months of this administration De Piro only intervened twice. After the first session he met the Cathedral Chapter, which he represented, and told them: “Gentlemen, my heartfelt thanks to the Reverend Chapter for the praise you have expressed for my efforts; I appreciate this praise even more, knowing from experience that the Chapter does not easily express this kind of praise. I know I am among beloved colleagues, who are also my brothers in the priesthood. Therefore, I know you will not be surprised if I tell you that I really felt God was guiding me to speak that evening in the Senate. Since Mgr Bonnici, the other representative, was indisposed, I felt it was my duty to express myself for the first time in the Senate. Lord Strickland’s motion was a vote of non-confidence in the Minister of the Police Force on the matter of morals. I felt the backing and the full support of all the Maltese clergy. On the other hand, I had to face the Ministers, who are indeed very wise and able members. I also had close to me a rigid Opposition, led by Strickland. At the far end of the Hall, the public present were keen to hear an enlightening debate. In itself the matter was a difficult one. Personally I feel deeply grieved for the harm those bars have caused. I have had to face sad cases connected with the orphanages I administer. Yet, despite my strong feelings, by God’s grace, I did not utter a word which could have offended anyone, and which later I would have regretted. I thank you for your praise, but allow me first of all to thank God for his help.”