Near the cross of Jesus stood his mother and his mother’s sister, Mary the wife of Clopas, and Mary of Magdala. Seeing his mother and the disciple he loved standing near her, Jesus said to his mother, “Woman, this is your son.” Then to the disciple he said, “This is your mother.” And from that moment the disciple made a place for her in his home. After this, Jesus knew that everything had now been completed, and to fulfil the scripture perfectly he said: “I am thirsty.” A jar full of vinegar stood there, so putting a sponge soaked in vinegar on a hyssop stick they held it up to his mouth. After Jesus had taken the vinegar he said, “It is accomplished;” and bowing his head he gave up the spirit.

Meditation on the pencil drawing of the suffering Jesus, drawn by the Servant of God Joseph De Piro when he was 14 years old. 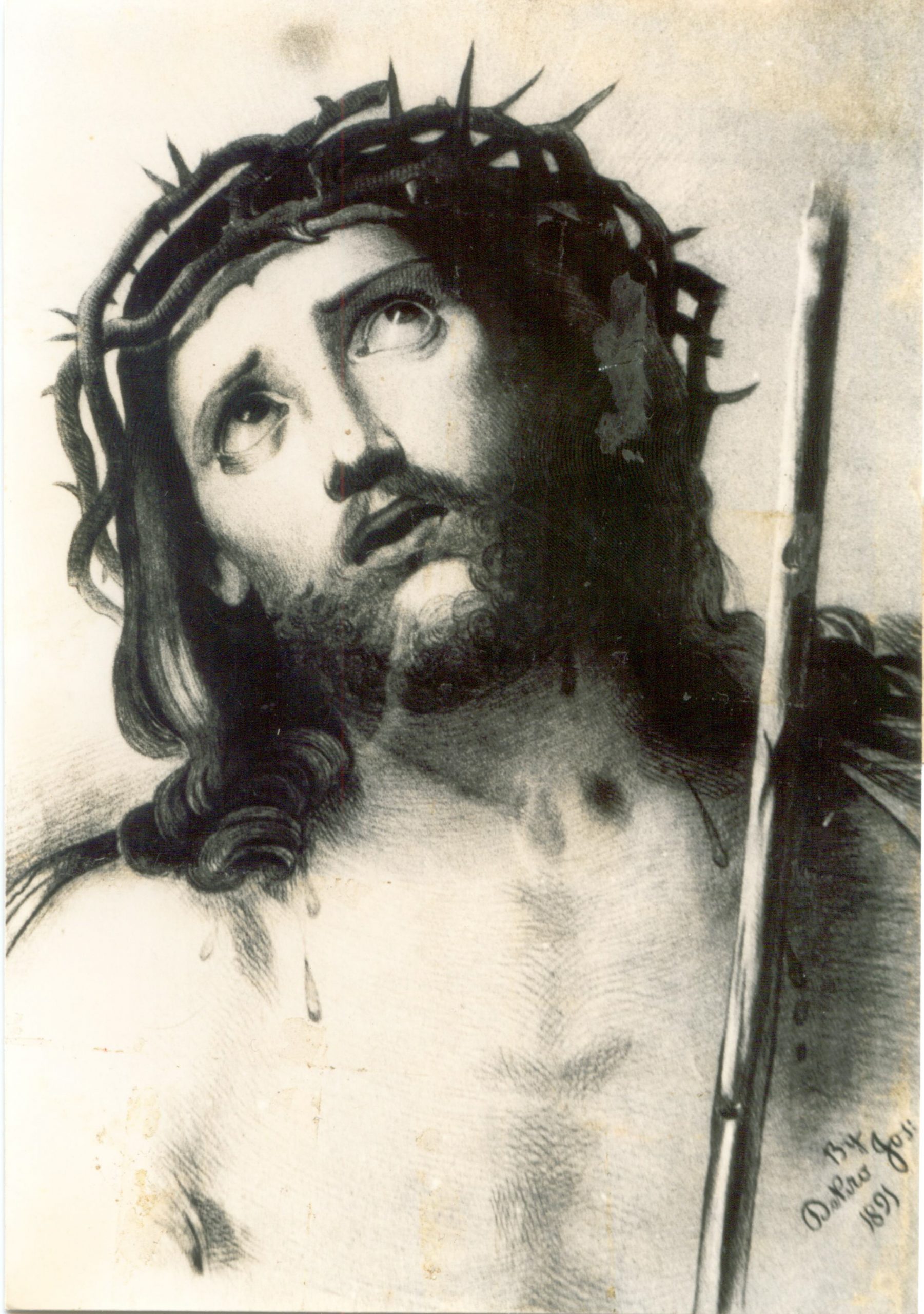 The drawing presents the bust of Jesus, crowned with thorns. It can be said to be an image of the Ecce Homo. Studying Joseph’s drawing one can notice that the artist has put few thorns on Jesus’ head, and these are put in a rather orderly way. As if the Servant of God wanted on the one hand to be faithful to the Scripture tradition and therefore presented Jesus crowned with thorns, but on the other hand he did not seem to be courageous to put too many on Jesus’ head. Also, some of the thorns do not even touch the Lord’s crown.

The same can be said regarding the blood coming out from the head and other parts of the body of Jesus: De Piro put some drops of blood but not too many; he only wanted to remind the others of Jesus’ sufferings.

Jesus’ eyes show quite clearly his sufferings; they are broken; the Lord is really suffering a lot. While suffering Jesus looks up; he seems to be communicating with the One above. De Piro seemed to be wanting to remind those who saw his drawing that the Son and the Father are one, even at this moment. The Suffering One is asking mercy from the One above. May be Joseph wanted to gather together several moments of the passion of Jesus in this one phase of his sufferings: eg., the moment when Jesus was praying to the Father in the Garden of Olives to have mercy on him.

Jesus is presented by the Servant of God as the sign of contradiction: the Son of God is silent, but he is very eloquent; Jesus’ eyes show that he is calm, quiet, not shouting, but he is undoubtedly in communication with the One above; he is praying to him in silence. Jesus so much prays calmly, quietly and without any shouting that his lips are closed. He is communicating with the Father only internally. For De Piro Jesus was convinced of what he had said before, namely that “… your Father who sees all that is done in secret will reward you.”

Again Jesus is presented as a sign of contradiction because he is drawn as weak, very weak, but at the same time quite strong. The Lord is undoubtedly effected a lot by his sufferings, but he is still in possession of his virtues: he is suffering in faith, he is suffering and still believing. De Piro presented Jesus’ trust in the Father and therefore his non despair also by drawing his hair well made.

De Piro’s drawing presents Jesus as far as his shoulders. It is a bust. And these are bare, naked. One can see the flesh. The suffering one is God, but he is also the one who incarnated, became human.

When drawing, the Servant of God was always very attentive for the preciseness and balance in the measures. The face of the suffering Jesus is not an exception. De Piro wanted to present Jesus as the perfect man.

Jesus has been presented by young Joseph as holding a reed in his hand. He is not holding it in anger; yet he is not happy, either, he is not silly.

It is also most important to say that while all the other drawings were found wrapped in paper and therefore hidden from the eyes of all, the drawing of the face of the suffering Jesus was put in a frame and hung to a wall in the family palace, at Mdina, for all to see. Since he was fourteen De Piro wanted to evangelise everyone about the sufferings of the Lord Jesus.