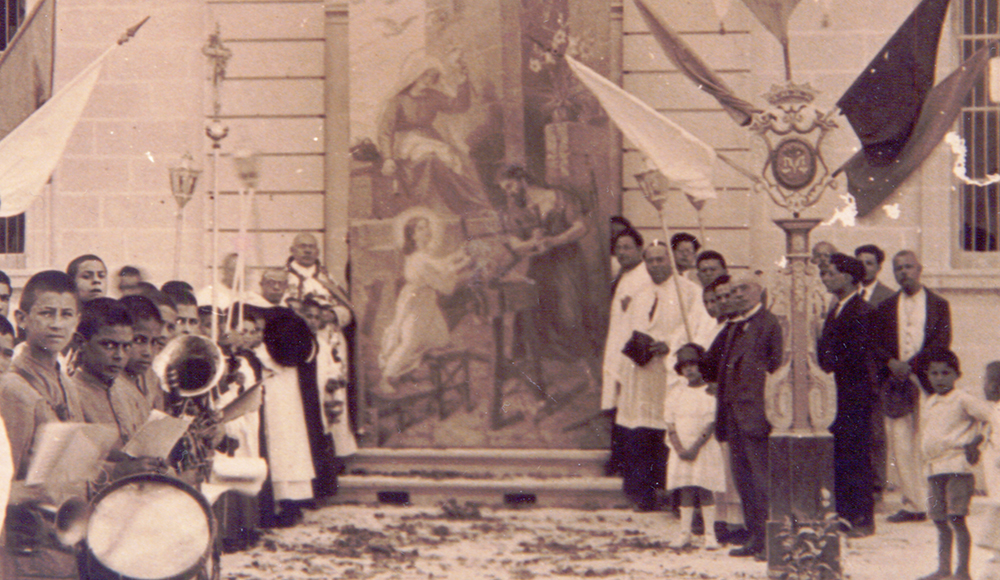 As part of the Diocesan Process of the cause for the Canonisation of the Servant of God, Joseph de Piro, various individuals who in some way or other have come into contact with the founder during his lifetime approached the Church Tribunal. These particular individuals were invited to relate all they knew about the Servant of God. Joseph Tonna was born in Mdina and lived there for some time. He also used to attend catechism lessons in the first house which belonged to the Society of St. Paul there. He stated that the de Piro family always had a strong devotion to St. Joseph; various members of the de Piro family used to frequent the Saint’s sanctuary in Rabat and some of them were even members of his Confraternity. Hence, it was certainly not surprising that Joseph de Piro was so devoted to St. Joseph.

The very same name of the Servant of God used to continually remind him that he was to show devotion to his Patron Saint.

As soon as he was ordained in 1902, Fr. Joseph was afflicted by sickness and therefore he could not take on the burden of various works. Nonetheless, according to Fr. Alfons Camilleri, ex – Provincial of the Minor Franciscan Order, de Piro did not turn down a request to take on the role of Apostolic Mayor of the Minor Franciscan Community in Rabat. This involved the administration of the Minor Franciscan Community’s assets and not those of the Confraternity of St. Joseph. However, the fact that he would have to frequent the Ta’ Giezu Convent which was closely situated to the St. Joseph Sanctuary, brought him closer to the Sanctuary itself and hence to the Patriarchal Saint.

Following the nomination of Mons. De Piro as Director of the St. Joseph Institute in St. Venera, in 1922, he himself ensured to disseminate the devotion to St. Joseph in this orphanage. According to Nazzareno Attard, an old boy of the Institute, the director continued to promote the feast of the 1st of May.

When in 1925 de Piro established a similar institute in Ghajnsielem, Gozo, he wanted this Home to bear the same name as the one in Malta: St. Joseph Institute. Br. Venanz Galea, the children’s prefect of this home and Peter Camilleri, an old boy, declared that Mons. de Piro wanted the chapel of the Institute in Gozo to be dedicated to St. Joseph. These two individuals also stated that it was de Piro who wanted to put up a bas relief of the image of St. Joseph on the external wall of the institute so that all those who would pass through that very commercial road in Ghajnsielem would be reminded to express devotion to the saint. Fr. Gorg Cassar, who was a seminarist during the time in which de Piro was rector at the Major Seminary in Mdina (1918 – 1920) testified that when he used to go to speak to the rector he used to notice that at times, the statue of St. Joseph belonging to Mons. de Piro would be facing the wall. One day he plucked up the courage to ask de Piro the reason why and he had replied that he used to do this when he would wish St. Joseph to grant him a grace he needed.

Historical Photo: Our Founder Joseph De Piro commissioned this painting from the Maltese artist Lazzaro Pisani in 1925 for the Chapel of St Joseph Home, Sta Venera. It depicts St Joseph working with our Lord, while Mary being on an upper level carefully watching over them. This photo was taken when the painting was unveiled in the presence of children of the home and various guests among them our Joseph De Piro, the Bishop of the time His Excellency, Rev. Mgr. A. Portelli (the patron of the painting) and Lazzaro Pisani. The painting to date adorns the main chapel of St Joseph Home.