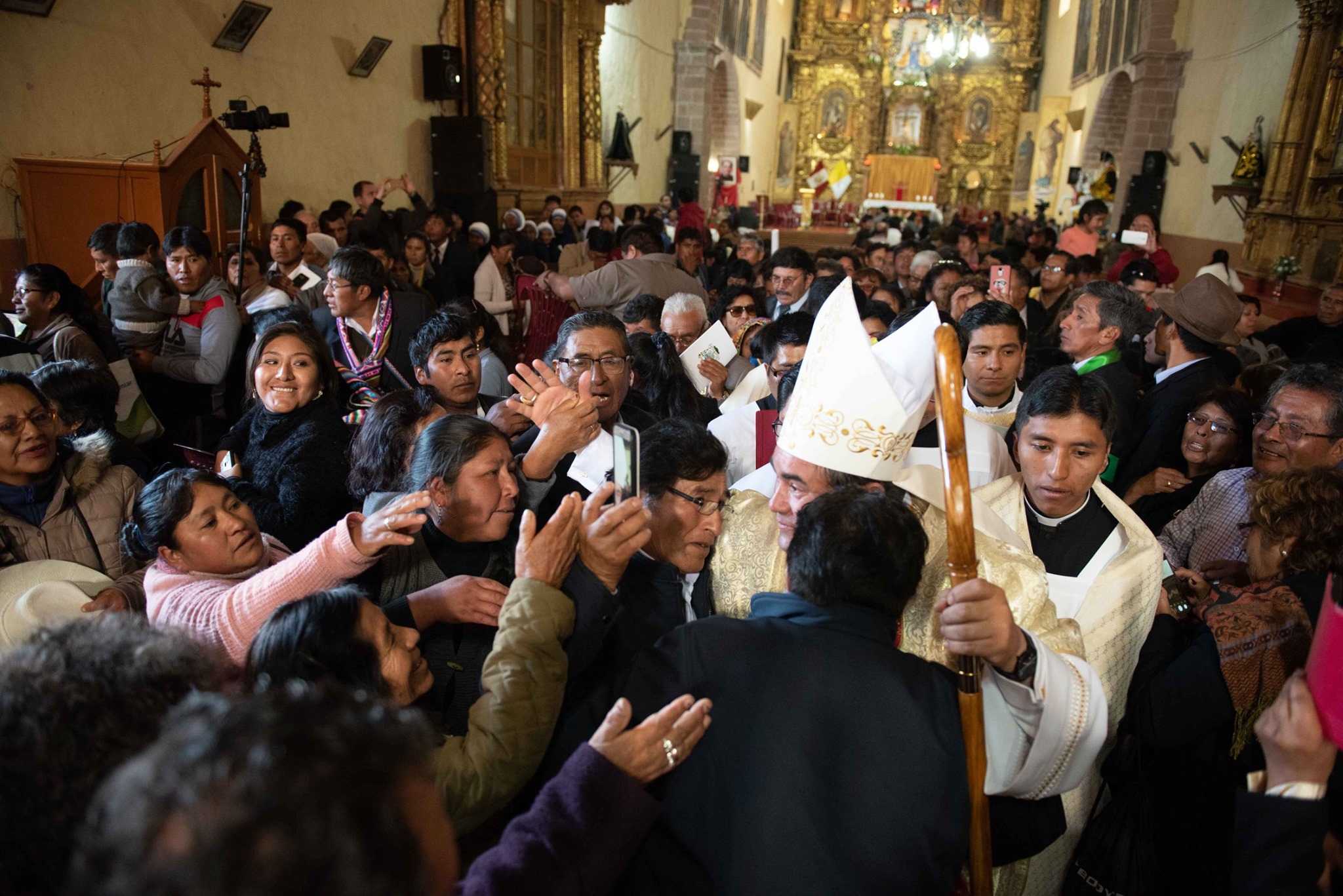 Following the consecration of Bishop Giovanni Cefai mssp at Arequipa Cathedral on the 24th June, attention shifted to the prelature where he will serve as Bishop, namely Santiago Apostol de Huancane. Situated deep into the Peruvian Andes region which borders Bolivia, the prelature is marked by distictive differences: from a deep seated community of Aymara speaking communities, to Quechua speakers, and to communities further up near Madre Dios, the vast forest which starts to become the Amazon.

Sunday morning of the 30th June, 2019 Foundation Day number 109 for our Society, we woke up to the usual crisp temperatures of Huancane hovering around zero degrees. We found that people had woken up before us, and the streets around us had all been decorated with small flags and banners. Bishop Giovanni found himself having breakfast as early as 7 am in a place called Taraco….from there it was a procession with cars, on foot, to Huancane, where he arrived to a rapturous welcome in the main square. As he inched his way to the church, old people came for blessings, others showered petals of flowers, and parents lifted their children to be blessed.

In every corner, there was a group of music players and dancers in traditional costumes of the sierra: bright orange, dark red, forest green, yellow, a mixture of sounds and colour and movement which made the small town alive with the best of the whole prelature. People came from Sandia, yet another 4 hours further in, in one of the remotest tropical parts of the Prelature, and brought gifts of exotic fruits and coffee. The liturgy itself continued in the same vein. A feisty Mgr Nicola Girasole the Papal Nuncio announced the establishment of the new prelature to thunderous applause, superseded only when he announced Bishop Giovanni as the first bishop of this prelature. In all there were 9 bishops in attendance, including those from Arequipa, Juli, Ayaviri, Cusco, and Puno, the surrounding dioceses.

The symbolic moment when Mgr Giovanni was led to take his seat (cathedra) and given his crozier, the wooden staff we reflected upon previously, marked the final part of the process of the installation process. The mass continued with lots of songs in Aymara, the language most spoken in the area, and was followed by dances and music from all the regions of the prelature. At the end of the mass, Fr. Mark Grima, Superior General, and Fr. Alex Busuttil led the mssp members in renewing their vows as missionary members of the MSSP. Following the concelebration, a huge party ensued in different locations outside the church, with Bishop Giovanni taking time to bless children and elderly, take photos, and be dressed in a large thick poncho as the evening light gave way to the mountain cold.