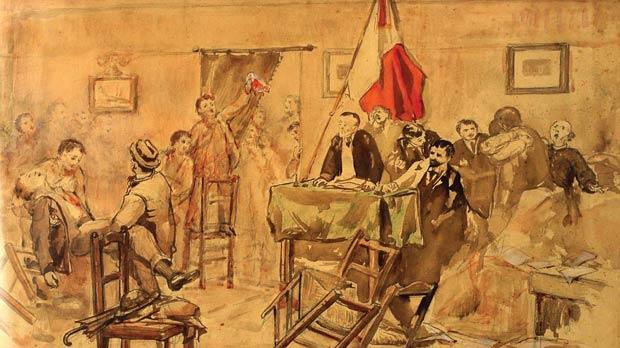 On the occasion of the centenary of the Sette Giugno riots, starting tomorrow Television Malta together with the National Celebrations Foundation and the National Archives will be broadcasting a four episode documentary, Culhat al Belt. Mgr Joseph De Piro who was a member of the National Assembly was among the few Maltese leaders who endeavoured to calm the unrest during this bloody event.

Father Tony Sciberras who researched the life of Mgr Joseph De Piro as part of the work being done in the cause of his beatification recalled how, in 1919 Monsignor Depiro as Deacon of the Cathedral’s Canonical Chapter was among 13 entities who were called by Sir Filippo Sciberras to participate in the National Assembly for Self-Government – i.e. for Malta to be granted responsible government by the British government. The 7 June riots occurred during the National Assembly’s second meeting.

“The second meeting was held on Saturday afternoon of the 7th June and Depiro was present. Not all 270 members were present for this meeting, but there were a great number, some 193 members. When the Maltese went up to the Giovine Hall where the National Assembly was being held, these people – with the exception of six of them – disappeared. Guzeppi Depiro was among these six people. Although we talk about the 7th June, it was actually a three day period: Saturday evening, all day Sunday and Monday. ”

The spark that led to the Sette Giugno riots of 1919 ignited when British soldiers opened fire on the congregation of Maltese protesting inter alia about the price of bread increase. Lorenzo Dyer, Carmelo Abela, Giuseppe Bajada and Emanuele Attard lost their lives while many others were hospitalised for treatment on account of injuries, many of them inflicted by bayonets.

Fr Sciberras said that Monsignor Depiro and five other members spent three days at police stations, at the lieutenant governor and other places to try to calm the escalating situation and to seek justice for the oppressed Maltese.

He explained that Mgr Guzeppi Depiro enjoyed great respect not only by the Ecclesiastical Authority but also by civilians because he was known for his works of charity to the poor.

The article and video-feature first appeared on TVM, on Sunday, 2th June 2019. Click here to view.