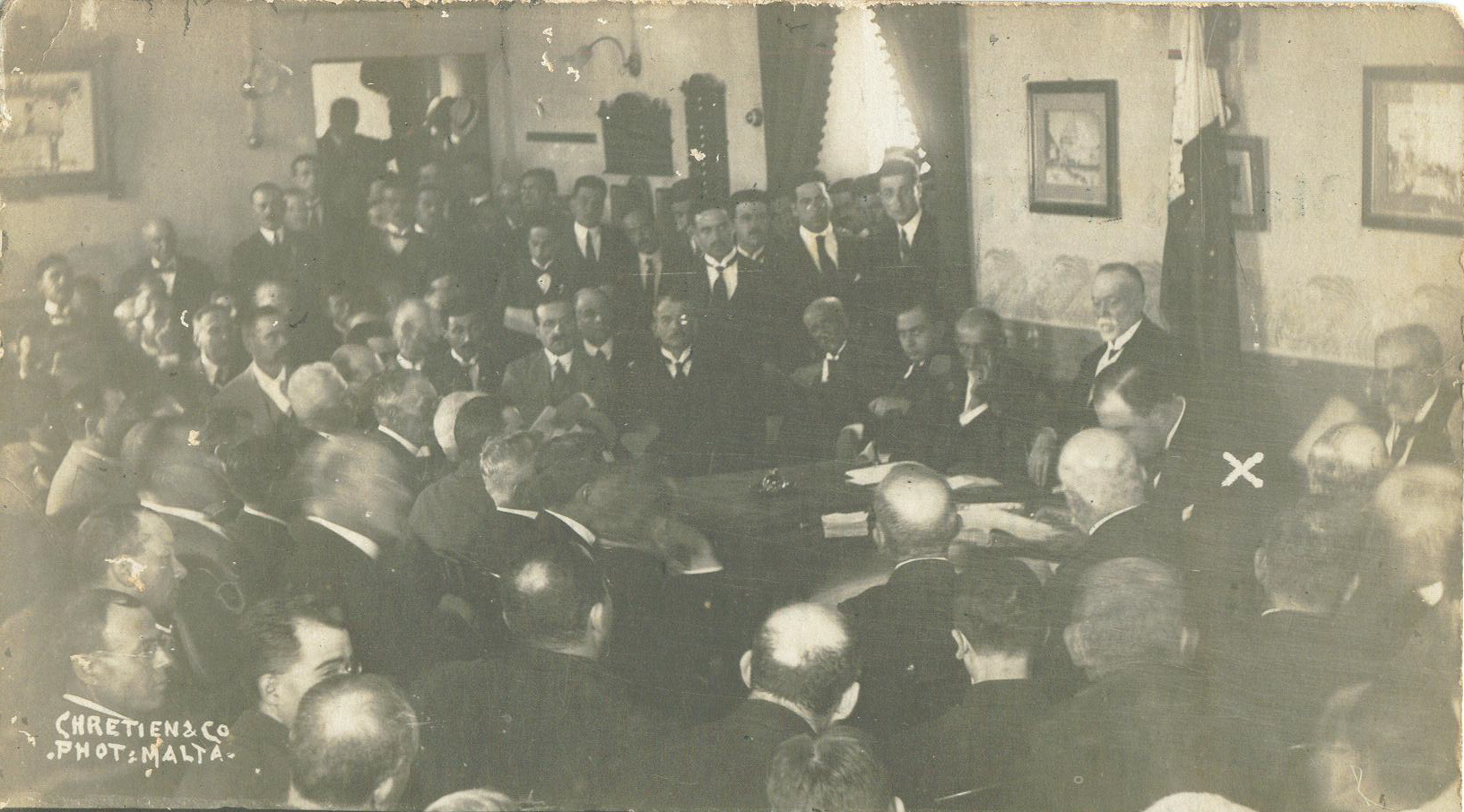 Malta had been under British rule for over a century. In this period, and especially in the latter half of the 19th century, Maltese politicians dispatched continuous requests and petitions so as to get a measure of internal political autonomy. Promises were made and promises were broken.

The implementation of some recommendations by the 1911 Royal Commission help improve the local economy in the years leading up to the First World War. Moreover, with the outbreak of hostilities, employment returned. The Royal Navy and allied warships, increasingly used the Maltese harbours. However, an economy that depended on wars could not endure; the war brought with it an increase in the cost of living and the price of several basic necessities shot up.

On November 23, 1918 Dr Filippo Sceberras offered to help draft a constitution for the Maltese islands, so that Malta could at least have full political and administrative autonomy. An appeal was made to all Maltese associations to send delegates for the establishment of a National Assembly. The metropolitan chapter of the cathedral of Malta sent four canons as delegates; Joseph De Piro headed the list.

At the first meeting – on February 25, 1919 – the National Assembly came into existence.

On Saturday, June 7, 1919, at 4.00 p.m., a second meeting was held at the La Giovine Malta club, during which a proposal to set up a deputation to draft a plan for the constitution was discussed. Only 15 members were chosen and De Piro was the delegate chosen to represent the cathedral chapter and clergy.

On the island there was considerable tension owing to widespread unemployment. A fortuitous spark turned the mass of people who went to Valletta into a riotous mob. Maltese police could not control the crowds and the British soldiers, called up in their stead, panicked and fired onto the unarmed demonstrators. Four men died from gunshot wounds on the first day and two others in the following days.

The meeting of the National Assembly was interrupted abruptly when the demonstrators carried a wounded man into the hall of Giovine Malta. They asked the delegates to intervene with the British on their behalf. Out of the members present only Lawyers A. Caruana Gatto and S. Vella, Fr Henry Dandria, Councillor G. Vassallo, S. Zammit Hammet and Mgr J. De Piro, did not hasitate to face danger. They went out to try to calm down the people.

An inquest commission, under the presidency of Judge A. Parnis LLD, was set up to establish the facts of that day. De Piro was called before this commission on August 21 and 26, 1919. On both occasions, evidence regarding his actions was given without any allusions to his own important role, but rather letting the merit go to others. The important documents wherein all these events are stated, are found in the archives of the Palace, Valletta.

De Piro stated: “I was present at the meeting of the National Assembly. After the discussion had lasted an hour and a half, someone entered the hall of the ‘Giovine Malta Club’. The person who came in showed us a handkerchief stained with blood and said: ‘See what they have done to us; you must protect us.’ 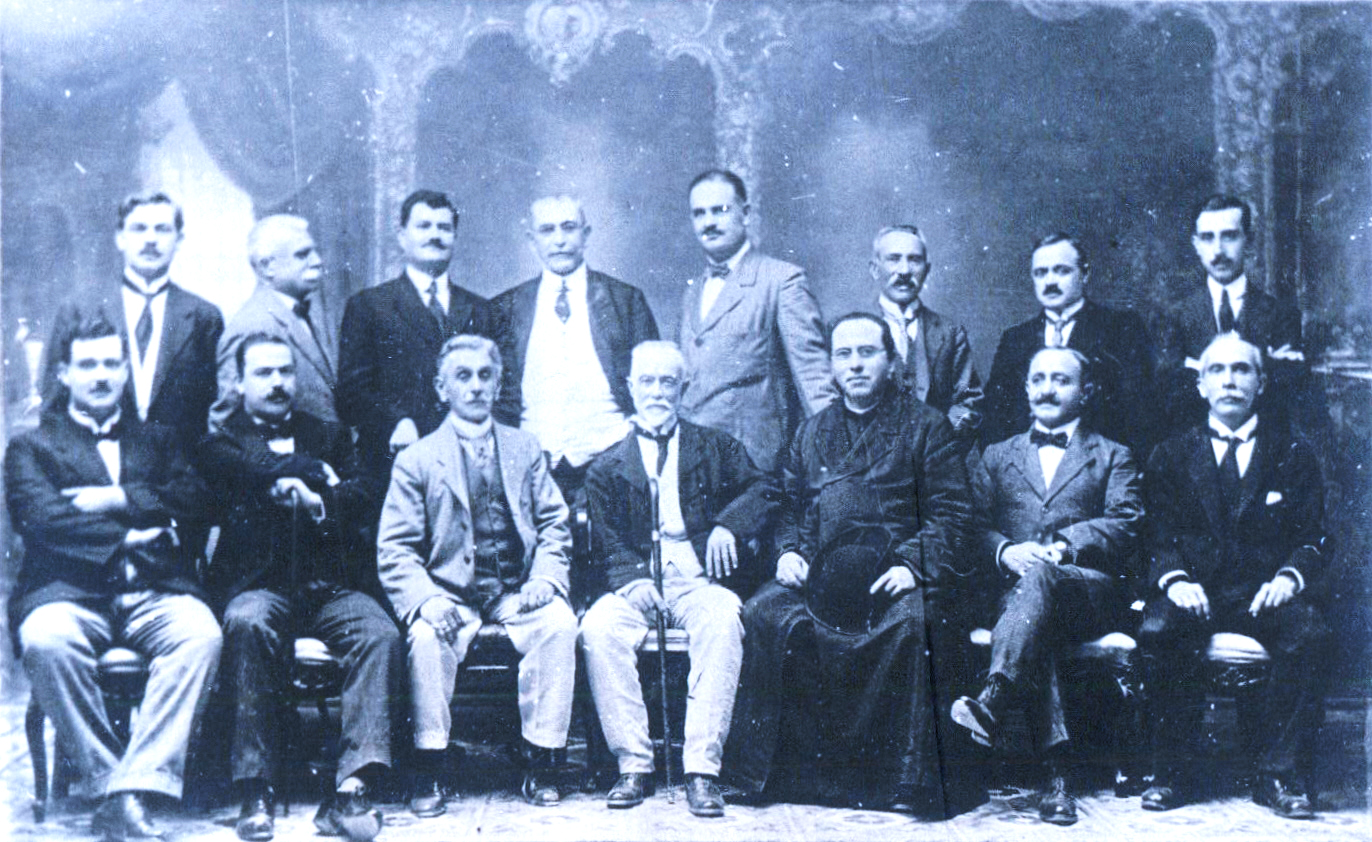 Following the riots of June 7 and 8, 1919, a committee was formed to help the injured and the families of the deceased. Mgr Joseph De Piro (seated, third from right) was its treasurer.

After this, the meeting was closed and I was asked to find some other members of the Assembly so that we might try to restore peace among the people. I accepted the request. We tried to find out by telephone where to locate Mr. Robertson, the Lieutenant Governor, and we were informed that he was in the office of the Commissioner of Police. We rang up the Assistant Commissioner of Police to give us police protection, to accompany us to the police station; but no help was forthcoming.

We went on our own and tried to enter the law courts by the back door in Strada Stretta; but we did not succeed. We went on to Strada S. Giovanni, but as we reached Strada Reale we heard a shot. So we turned back to the ‘Giovine Malta.’ … In the ‘Giovine Malta’, we found the Assistant Commissioner of Police waiting for us.”

Mr. Robertson was at the law courts, so they went through Strada S. Lucia and Strada Reale to enter the courts.  Advocate Caruana Gatto stated: “The first time we tried to enter the law courts, some of the people in the crowd were unfriendly toward us, especially towards Mgr. De Piro, and shouted: ‘You are to blame for all this!’ Mgr. De Piro replied: ‘Well, well. We are trying to save you, and you are blaming us!’”

De Piro’s composure in his evidence revealed his integrity. He continued: “We spoke to the Lt. Governor, asking him to withdraw troops from the streets, and we guaranteed that the people would be pacified. Robertson was not fully convinced, and several times he asked us the same question: ‘Are you really able to guarantee a peaceful outcome?’ We answered that it was necessary for us to obtain permission to address the crowd from one of the windows of the law courts. This was granted …

Lawyer Caruana Gatto addressed the crowd, relating what had passed between the Lt. Governor and us. He asked the people to disperse, thus helping us as mediators to keep our word to the Lt. Governor. The crowd showed signs of cooperation, and we thought we had succeeded in our task. This, however, was not yet to be. … We spoke to the crowd and assured them that those responsible for mistakes made on that day would be punished. We advised the crowd to disperse. Mgr. De Piro, Lawyer Vella and myself felt they were satisfied and the crowd started to disperse …”

June 8, was a turbulent day and a time of grave anxiety for De Piro. The crowds were still restless, and more incidents took place: an English soldier had been gravely injured and the printing office of the pro-British Daily Malta Chronicle had been attacked.

Mgr. De Piro defended the cause of the Maltese people, and in his evidence he added: “I spoke to the General (Hunter Blair) regarding the discharges from the dockyard … I personally felt this was unfair to the Maltese, who had done four years of valid work during the war.”

Sunday afternoon brought more unrest; Lt. Governor Robertson communicated again with the mediators, asking them for help. Lawyer Caruana Gatto met Lawyer Vella, and together they went to Robertson, who was at the General’s house. De Piro gave them the news that the crowd was becoming uncontrollable, and that Francia’s home, opposite the Royal Theatre, was being attacked. De Piro said: “We must go and tell the people to stop this aggressive rampage; it will only delay and ruin our good cause.”

Fr Joseph De Piro, a priest whom no one can accuse of any fault; an example of integrity, devoted dedication and holiness; a patriot, who was involved in heartbreaking events – the unrest and deaths on 7th June 1919. On that occasion he was on the firing line and close to the injured. For the Church and his native country, De Piro is an exemplary priest and a model patriot. Everyone should love and admire him.

A statement published in 1927

Inside the residence, the atmosphere was tense as the archbishop and a small group of priests, listened to the tumultuous uproar of the crowd outside. Both Bishop Portelli and De Piro went out and faced the crowd: “What do you want, my sons?” Some were heard shouting: “We want to burn down the curia!” De Piro replied: “All there is in here, isn’t it yours? Come … calm down … and go home quietly.”

The kind tone and approach of Bishop Portelli and De Piro, brought about a certain lull in the angrier of the crowd.

Bishop Portelli addressed the crowd in the palace square and later from the balcony of St. John’s Co-Cathedral. Those present calmed down by what he said: “Do not listen to the few who are inciting you to create trouble. Follow the leaders of the national assembly: Dr Filippo Sceberras, Lawyer Caruana Gatto and Mgr. De Piro. You can rely on these leaders.”

De Piro was highly esteemed by the British authorities; in him they recognised the ideal mediator, someone with true Maltese blood in his veins. As a Maltese patriot with a deep love for his country, he struggled for justice, in a non-violent way. His contribution, as well as that of those who shared the same ideals, was a great help towards the approval of a Constitution that granted self-government to the Maltese, albeit with limitations.

A statement published in 1927 stated: “Fr Joseph De Piro, a priest whom no one can accuse of any fault; an example of integrity, devoted dedication and holiness; a patriot, who was involved in heartbreaking events – the unrest and deaths on 7th June 1919. On that occasion, he was on the firing line and close to the injured. For the Church and his native country, De Piro is an exemplary priest and a model patriot. Everyone should love and admire him.”

The article and video-feature first appeared on Times of Malta, 2th June 2019.